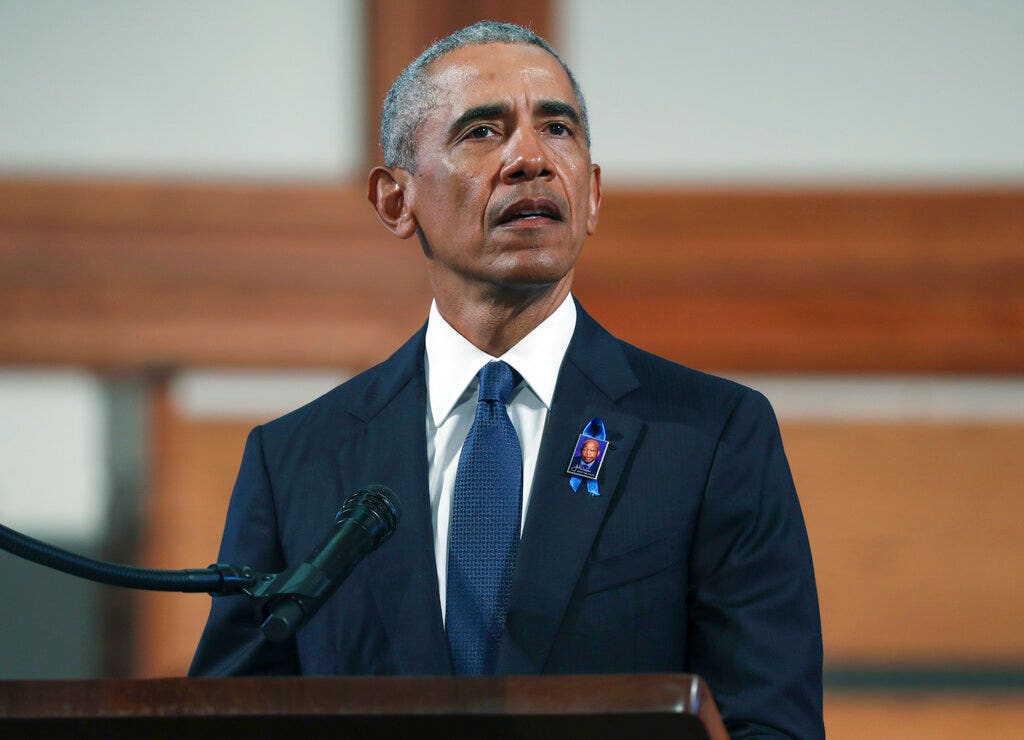 “Joe Biden is clearly not up to the rigors of campaigning for president, so he’s calling in Barack Obama as a reinforcement,” Trump campaign communications director Tim Murtaugh said.

OBAMA HITS THE CAMPAIGN TRAIL FOR HIS FORMER WINGMAN

Obama has helped Biden, his vice president for his eight years in the White House, fundraise, headlined virtual events for Biden and gave a major address at the Democratic National Convention. On Wednesday, when Obama holds a socially distanced drive-in car rally for Biden in Philadelphia, it will be the former president’s first time in front of a live crowd on behalf of Biden.

But Murtagh said the former president cannot do much to help his former right-hand man.

“Obama can’t help Biden defend his own record of putting foreign interests ahead of working Americans in bad trade policies, crushing our energy jobs under massive regulations, killing manufacturing jobs, and refusing to enforce our borders,” he said.

For Trump, having his predecessor in the White House out on the campaign trail provides another target.

The president has worked hard to undo some of the major achievements during Obama’s tenure in the White House, from trying to scrap the Affordable Care Act, known as Obamacare, to taking the U.S. out of the Paris Climate Accords and the Iranian nuclear treaty.

Democratic vice presidential nominee Sen. Kamala Harris said that Trump’s “got this weird obsession with wanting to get rid of whatever President Obama and Vice President Biden created,” while campaigning Wednesday in Ashville, N.C.

Last month, a crowd at Trump’s rally in Nevada chanted “lock him up” after the president accused then-President Obama of “spying” on his 2016 campaign.

Trump has also repeatedly criticized his predecessor, by stating how ineffective a president he was.

“President Obama did not do a good job and the reason I’m here is because of President Obama and Joe Biden. Because if they did a good job I wouldn’t be here,” Trump argued in August just ahead of Obama’s speech at the Democratic convention.

In his address, Obama teed off on his successor in the White House.

And he slammed Trump’s handling of the coronavirus pandemic and the collapse of the nation’s economy, Obama argued: “’The consequences of that failure are severe: 170,000 Americans dead. Millions of jobs gone while those at the top take in more than ever.”

Obama has said that Trump’s tenure in the White House unleashed America’s worst impulses diminished the country’ss proud reputation around the world, and threatened democratic institutions.

On the eve of Obama’s appearance in Philadelphia, Trump campaigned in Erie, Pa., which is on the opposite side of the crucial battleground state. But he was suprisingly mum about his predessor.

However, this past weekend, at a rally in Macon, Ga., Trump spoke about Obama’s tireless campaigning for former Secretary of State Hillary Clinton in the closing weeks leading up to the 2016 election.

“He campaigned harder for Hillary than she did,” Trump said. “He was very ineffective as a campaigner.”