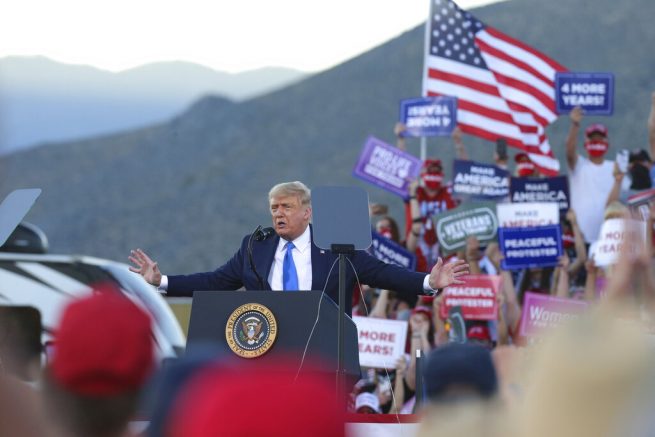 Trump supporters have condemned Joe Biden and what President Trump called his “criminal enterprise” family. During the President’s rally in Nevada Sunday, attendees could be heard cheering “lock him up.”

Their chants came in response to President Trump accusing the former vice president of using millions of dollars to help his son escape trouble in Ukraine. The President went on to say Biden is from a “failed and corrupt political class.”

The Nevada rally was part of President Trump’s journey on the campaign trail with just about two weeks left until the November election.

The President took to the stage in Carson City in an effort to resonate with voters as they hit the polls. While speaking to thousands of supporters, he warned his Democrat opponent would lead the country further into lockdown.

The President went on to highlight his administration’s commitment to delivering coronavirus treatment and recovery options.

“Under my leadership, we are delivering a safe vaccine and very rapid recovery,” he noted. “We have the military ready to deliver it, it’s going to be incredible.”

The President himself shared his own experience with the virus, saying he felt like “superman.” Overall, he reaffirmed that a vote for Democrats is a vote for open borders, a crippling economy and the loss of Second Amendment rights.

“The Democrats and this horrible group of people, they have nothing but disdain for you and for your values,” said President Trump. “They lecture you on the need for open borders while they live behind gated communities like Nancy Pelosi.”

The President plans to campaign every day leading up to Thursday’s second and final debate against Biden.