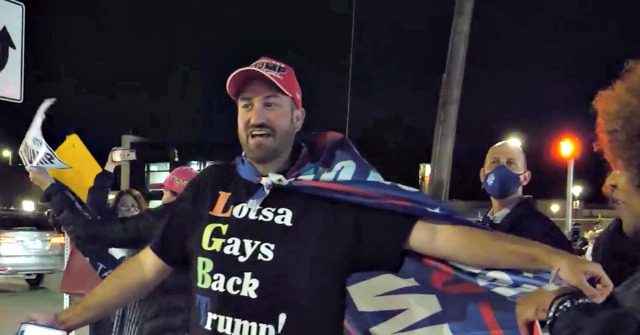 President Trump has done more for minorities than any of his predecessors, a gay Republican said Saturday at the prayer rally for Trump outside Walter Reed Medical Center.

“This man here has done more for the gay community and the black community and all minorities than any president we’ve had in history,” the Trump supporter identified as Heath told Breitbart News.

The man has done so much for our community but the mainstream media twists it so much, and they will not give him credit for anything he’s done. I mean, he’s called out world leaders who has [sic] persecution of gays and lesbians in their countries. He’s the first president that ever went into his first term supporting gay marriage already. He called out the gay and lesbian community in a Republican National Committee in 2016. It’s unheard of.

Heath joined a crowd of other Trump supporters outside Walter Reed Medical Center where President Trump was spending several days after he and First Lady Melania Trump tested positive for the coronavirus, according to Breitbart News.

Heath said it was more difficult coming out as a conservative than it was coming out as gay, adding that he had always voted Republican.

Thanks to President Trump, the Republican Party had become more diverse, according to Heath.

Heath described himself as a patriot and an American, adding that the party’s diversity made him emotional.

“Because what my sexuality doesn’t determine… who I vote for and what my beliefs are,” he noted.

As to the president’s fight against the coronavirus, Heath told Breitbart News that “If anybody can kick its butt, he can.”