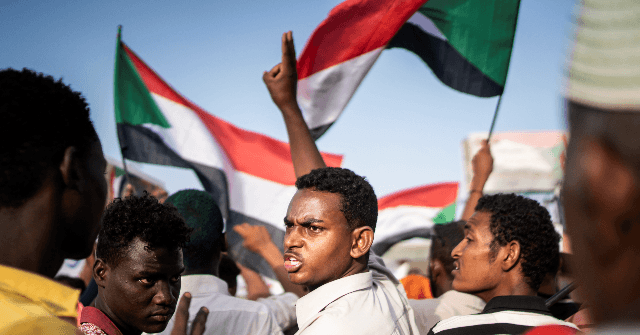 President Donald Trump on Monday announced a deal with the government of Sudan to pay $335 million in compensation to the victims of terrorism and their families.

In return, Trump promised to remove Sudan from the U.S. government’s list of state sponsors of terrorism.

Trump made the announcement on Twitter, where he specified that Sudan will not be delisted as a state sponsor of terrorism until those compensation checks clear:

GREAT news! New government of Sudan, which is making great progress, agreed to pay $335 MILLION to U.S. terror victims and families. Once deposited, I will lift Sudan from the State Sponsors of Terrorism list. At long last, JUSTICE for the American people and BIG step for Sudan!

The East African on Tuesday reported that “African leaders, including President Uhuru Kenyatta and South Africa’s Cyril Ramaphosa, had several times called for the lifting of sanctions to help the transitional government correct mistakes of the previous regime of Omar al-Bashir.”

Sudan’s current Prime Minister Abdalla Hamdok welcomed Trump’s announcement. He blamed Sudan’s past support for terrorism, including Al-Qaeda under Osama bin Laden and violence in Darfur, entirely on the Bashir regime. Bashir’s three decades of rule ended in April 2019 when he was ousted after months of protests.

“As we’re about to get rid of the heaviest legacy of Sudan’s previous, defunct regime, I should reiterate that we are peace-loving people and have never supported terrorism. We very much look forward to your official notification to Congress rescinding the designation of Sudan as a state-sponsor of terrorism, which has cost Sudan too much,” Hamdok wrote in tweets of his own.

A U.S. official told Reuters the delisting of Sudan as a state sponsor of terrorism could begin the process of normalizing diplomatic relations between Sudan and Israel. According to this source, “the details and timing were still being worked out” for such a diplomatic breakthrough.

“A key sticking point in the negotiations was Sudan’s insistence that any announcement of Khartoum’s de-listing not be explicitly linked to normalization with Israel. Differences remain between Sudanese political and military officials on how far and how fast to go in warming of relations with Israel,” Reuters noted.

Hamdok himself reportedly told Secretary of State Mike Pompeo in August that delisting should not be directly linked to normalizing relations with Israel.

Sudanese officials said three weeks ago that negotiations to recognize Israel stalled because Sudan’s transitional government feared popular unrest unless it secured financial relief first – at least double the amount the U.S., Israel, and the United Arab Emirates were offering – and the only way to provide the desired economic security was to begin lifting sanctions against Sudan.

Sudan is still a few years away from real democracy, as Hamdok governs alongside a military junta that holds the chairmanship and half of the seats on the “Sovereign Council” established after Bashir’s ouster. The Sovereign Council is supposed to transition to civilian control next year, then cede power to an elected government in 2022.

Secretary of State Mike Pompeo wrapped up his trip to the Middle East and Sudan with a stop in Oman on Thursday to meet with Omani Sultan Haithambin Tarik Al Said. https://t.co/HS2jWP0s6U

General Abdel-Farrah Burhan, the head of the Sovereign Council, also hailed President Trump’s announcement as a “constructive step” and proper “recognition of the historic change that has taken place in Sudan.”

The Associated Press reported on Tuesday that not all victims of Sudan-sponsored terrorism are pleased with the settlement deal brokered by the Trump administration.

“More than 500 of the 700 victims of the 1998 bombings at the U.S. embassies signed a letter rejecting Sudan’s settlement offer, partly because it would award more money to Americans than Africans who worked there,” the AP noted. “The letter said the plan offers compensation dependent on a victim’s nation of birth, rather than the severity of injuries.”

Other representatives for the families of victims said the settlement deal was reasonable and should be implemented swiftly by the U.S. Congress to stabilize Sudan and secure its continued cooperation in regional anti-terrorism efforts. Advocates of the deal said Sudan has been especially helpful at restraining the malevolent influence of Iran.

An important remaining order of business for Sudan will be restoring its sovereign immunity to prevent future terrorism lawsuits from being filed against it. Sudan’s claims to sovereign immunity were most recently rejected by the U.S. Supreme Court in May 2020, allowing a case filed by victims of the 1998 bombings at the embassies in Kenya and Tanzania to move forward.

224 people were killed in those attacks, including 12 Americans. The attacks were linked to al-Qaeda, whose operatives were harbored by the Sudanese government at the time. The Bashir regime in Sudan was also accused of helping al-Qaeda move personnel, weapons, and money into Kenya to prepare for the attack on the U.S. embassy there.