President Donald Trump rejected pressure from the 60 Minutes TV show and suggested he would renew policies which allow migrant job-seekers to be prosecuted when they bring a child to trigger the 2015 Flores catch-and-release loophole.

“When you allow the parents to stay together, OK, when you allow that, then what happens is that people are going to pour into our country,” he told 60 Minutes‘ Lesley Stahl, in a show broadcast Sunday night. Trump continued:

We are looking at a lot of things … What we want to do is change the immigration laws because they [are] a laughing stock all over the world.

Trump’s answer came as Stahl suggested that he should ignore the nation’s popular immigration laws which preserve Americans wages by directing a zero-tolerance policy of prosecuting all illegal migrants. It “was on the books, but [President Barack Obama] didn’t enforce it, you enforced it, you launched the zero-tolerance policy,” Stahl said.

In May, Trump demanded his agencies adopt a zero-tolerance enforcement of the law but backtracked in June as the established media used recordings of crying children to paint the border-enforcement laws as vindictive and inhumane.

Prior presidents have largely ignored the laws, but Trump and his deputies are looking for several ways to stop the migration, amid loud pro-migration demands from Democrats, business-first Republicans, and the establishment media.

Trump’s showed his hardnosed determination to block migrants to Stahl just as a group of Central American migrants announced they are launching another “caravan” of job-seeking migrants to travel up through Mexico to the U.S. border. 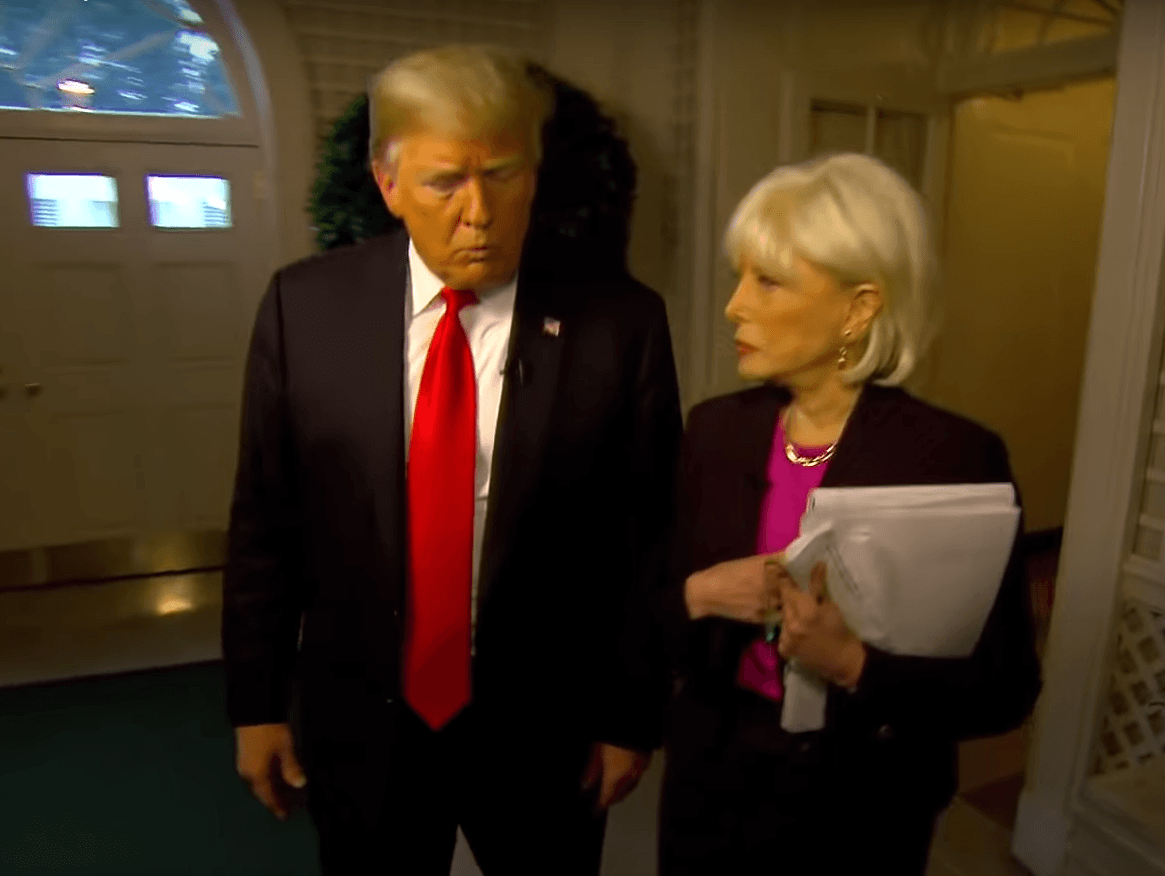 Trump’s ability to control the border is growing — despite congressional passivity and opposition — because Attorney General Jeff Sessions has been waging a war of legal attrition in the agencies and the courts.

That legal war has gained several victories. For example, Sessions persuaded the Supreme Court to accept Trump’s curbs on Muslim migration, and he has ordered his agency’s immigration-court judges to ignore Obama’s claims that migrants deserve asylum when they are threatened by spouses and criminal gangs.

Sessions has also gotten a hostile Californian judge to agree that migrants can be detained with their child or children for 20 days.

Officials are now considering using the 20-day rule as a foundation for a policy which tells migrant men or women that they can be detained with their child or children for 20 days and then must make a decision whether they want to go home, or have the child sent to a shelter while the parents remain detained until his or her court case is completed, in as little as 40 days.

We are looking at a lot of things … I want all the laws changed. There have to be consequences, Lesley, for coming into our country illegally. Part of the reason, I have to blame myself, the economy is so strong that everybody wants to come into the United States.

Nine ways in which Trump, AG Sessions, and DHS Nielsen are gradually getting migration under control. Estb. is fighting tooth-and-nail to distract middle-class from bigger issue of legal immigration/visa-workers which keeps wages low & stock-values high. https://t.co/H3AWytzza6

Another option for Trump is being developed by AG Sessions, and it would direct the judges in the Justice Department’s immigration courts to stop allowing migrants to get bail and be released into the United States.

Sessions began to create that option in September when he asked migration lawyers to submit their views on a 2005 decision by judges which allows migrants who are asking for asylum to ask for bail and get released.

The opinions were due at the justice department by Oct. 9. The letter suggests that Sessions and his aid will use their legal expertise to rewrite the 2005 decision, and bar migrants from getting bail.

In an article for TheHill.com, Nolan Rappaport, an immigration expert, wrote:

The pertinent provision states when it’s been determined that a person has a credible fear of persecution, he “shall be detained for further consideration of the application for asylum,” and the Supreme Court held that this language “mandate(s) detention of aliens throughout the completion of applicable proceedings and not just until those proceedings begin.”

In other words, mandatory detention continues to apply until they have been granted asylum, deported, or – and this is key – they choose voluntarily to leave on their own.

If aliens placed in expedited removal proceedings have to be detained until they can be deported or are granted asylum, most of them will go home rather than stay at a detention center on a military base for several years with no realistic hope of being granted asylum.

The rewrite has to be done carefully by Sessions because pro-migration groups will ask the California judges to block its implementation.

Q. Mr. President, there are reports that your administration is considering a new family separation policy at the border.  Do you think that —

THE PRESIDENT:  We’re looking at everything, Phil, that you can look at when it comes to illegal immigration.  We have people that are trying to get into our country because of how well our country is doing.  And, you know, in the old days, when the country wasn’t doing well, it was a lot easier.  Now everybody wants to come in.  And they come in illegally and they use children.  In many cases, the children aren’t theirs.  They grab them and they want to come in with the children.  So we are.  We’re looking at a lot of different things having to do with illegal immigration.

What should happen is the Democrats should pass good bills.  This is the same situation that President Obama found himself in.  He had separation, and people didn’t talk about.  The famous picture from 2014 that they all thought was our picture, that was a picture of young children in jail cells that was during the Obama Administration.

Q    Mr. President, do you think the original family separation policy from this summer was effective in deterring people from crossing at the border?  Did it work?

THE PRESIDENT:  Well, I will say this: If they feel there will be separation, they don’t come.  You know, if they feel there’s separation, it’s a — it’s a terrible situation.  We want to go through Congress, but the Democrats don’t want to approve anything.  They’re obstructionists.

We’re doing an incredible job.  But the one thing I will say: The country is doing so well economically and every other way that more people want to come in than ever before.  So we have to be very strong.

Q    (Inaudible) said that you agree with her that families should be able to enter the country, as her parents did and became U.S. citizens.  Do you agree that family members should be allowed to come into the United States?

THE PRESIDENT:  I do, but they have to come in legally.  I want a lot of people to come in.  Frankly, we need people coming in, because I have a lot of companies moving back in.  Jobs are coming back in.  You take a look at all of the new plants that are being built in the United States.  We have a lot of people calling me; they want workers.  And we want people to come into our country.  That’s what people don’t understand about me.  But they have to come in on a merit basis.  And that’s what we’re working out with Congress.

Q    But you say you were against chain migration.  And the First Lady said that you and she both agreed family members should be allowed in.

THE PRESIDENT:  Chain migration is not a good thing.  Chain migration is bad.  If you take a look at the lottery system, that’s bad.  What I want is merit.  I want a lot of people to come in.  We have great car companies entering our country again.  This hasn’t happened for 35 years.  We have companies like Foxconn going to Wisconsin with a massive, massive plant.

Q    (Inaudible) campaigning on immigration as an issue?

THE PRESIDENT:  Look, as far as I’m concerned, as to whether or not it’s an issue — for those of you that didn’t hear — immigration is always tricky, but to me it’s not tricky.  You have to do the right thing whether there’s an election or not.