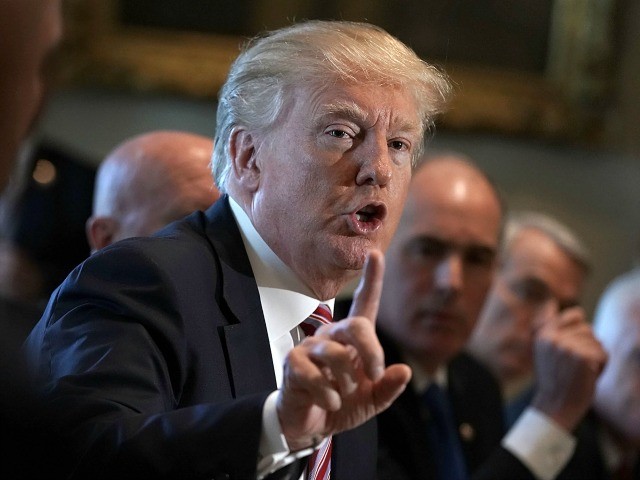 President Donald Trump confirmed Wednesday that he refused a meeting with Canadian Prime Minister Justin Trudeau at the United Nations General Assembly over Canada’s refusal to negotiate their high tariffs on dairy products.

“Yeah I did,” president Trump answered. Lee asked, “Why?”

“Cause his tariffs are too high and he doesn’t seem to want to seem to want to move and I’ve told him forget about it and frankly we’re thinking about just taxing cars coming in from Canada. That’s the mother lode. That’s the big one,” Trump explained. He said the U.S. is “very unhappy with the negotiations and the negotiating style of Canada. We don’t like their representative very much.”

Trump called Mexico “great” as the two countries have come to a trade deal agreement. He lauded U.S. Trade Representative Bob Lighthizer’s negotiating then turned back to Canada.

“Canada has treated us very badly. They’re treated our farmers in Wisconsin, and New York state, and a lot of other states very badly,” he said, citing 300 percent Canadian tariffs on dairy products. “How do you sell a dairy product at 300 percent? The answer is, you don’t.” He called the tariffs a barrier. “So Canada has a long way to go.”

“What does that mean for NAFTA? Will you be pulling out of NAFTA?” the reporter followed up.

“I don’t like NAFTA. I never liked it. It’s been very bad for the United States. It’s been great for Canada. It’s been great for Mexico. Very bad for us,” said Trump, who refused to use the name NAFTA for a new deal. “I’ve seen thousands of plants and factories close. I’ve seen millions of jobs lost to oil companies that moved. I mean Mexico has 25 percent of our oil business now because of NAFTA,” said Trump. “Under our deal, not going to happen anymore.”

Trump said he told Mexico that the U.S. has to “keep companies,” but Mexico is also getting a lot in the new U.S.-Mexico trade deal. “Mexico made a very good deal. But with Canada it’s very tough,” he continued. “What we’re doing is if we made a deal with Canada, which is a good chance still, but I’m not making anything near what they want to do. It wouldn’t be fair.”

President Trump suggested that a potential U.S.-Mexico-Canada trade deal could be called USMC. “But it will probably or possibly be just USM,” he said suggesting it will likely only include the U.S. and Mexico. “Canada will come along,” said Trump who added that if they don’t make a deal, the U.S. will “make a much better deal” by taxing Canadian auto exports to the U.S.

He resolved, “We will put billions and billions of dollars into our treasury and frankly, we’ll be very happy because it’s actually more money than you can make under any circumstance with making a deal.”