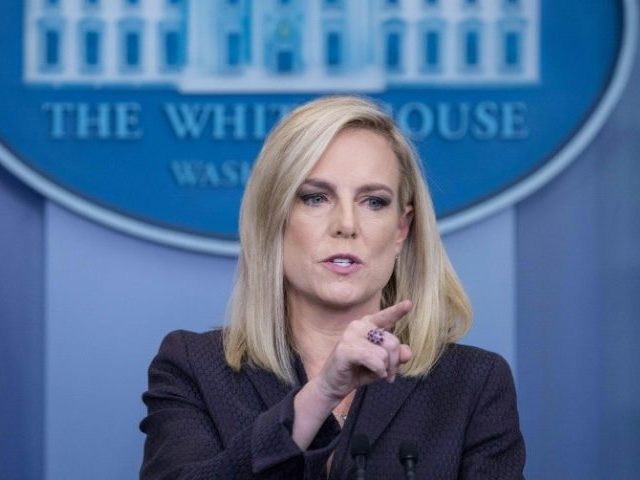 The Department of Homeland Security has released its draft regulation to bar the legal immigration of people who are likely to rely on taxpayer-funded aid programs, including medical care, pensions, and anti-poverty aid.

The regulation is based on long-standing law, and could begin operating early next year.

Overall, the regulation is expected to sharply cut the taxpayers’ cost of supporting the roughly 1.1 million legal migrants who are given green cards each year. Over time, it may also reduce the inflow of unskilled labor, helping nudge up wages for unskilled Americans and prior immigrants.

The regulation uses existing law, so migration advocates may not be able to stop it via lawsuits unless President Donald Trump loses the 2020 election. However, business groups likely will lobby Congress to override the regulation.

The proposed regulation does not cover immigrants who already have green cards or citizenship. But the regulation will cover many illegals, overstays, and visa-workers who are in the United States and hope to file an “Adjustment of Status” that would get them green cards and also allow them to import their relatives via the chain-migration rules that Congress has refused to reform.

the Department of Homeland Security (DHS) announced a proposed rule that will clearly define long-standing law to ensure that those seeking to enter and remain in the United States either temporarily or permanently can support themselves financially and will not be reliant on public benefits … [or] likely to become burdens on American taxpayers.

The phrase “heavily weighed negative factor” implies that most — but not all — poor, sick and unskilled applicants will not be given residency.

The regulation does not count taxpayer aid related to the Affordable Care Act or the Children’s Health Insurance Program, and it excludes taxpayers’ rebates under the Earned Income Tax Credit. The rule also allows would-be immigrants to receive a small amount of aid, or roughly $3,765 for a family of four, or a $1,821 for a single person. The rules only apply once the regulation is established, so it does not cover potential migrants’ current use of aid programs.

The DHS statement and DHS Secretary Kirstjen Nielsen noted that the regulation implements a long-ignored law excluding migrants who may impose a “public charge” on Americans:

The term “public charge” as applied to admission of aliens to the United States has a long history in U.S. immigration law, appearing at least as far back as the Immigration Act of 1882. In the late 19th and early 20th centuries public charge was the most common ground for refusing admission at U.S. ports of entry.

“Under long-standing federal law, those seeking to immigrate to the United States must show they can support themselves financially,” said Secretary Nielsen. “The Department takes seriously its responsibility to be transparent in its rulemaking and is welcoming public comment on the proposed rule. This proposed rule will implement a law passed by Congress intended to promote immigrant self-sufficiency and protect finite resources by ensuring that they are not likely to become burdens on American taxpayers.”

The new policy was slammed by advocates for mass migration and imposed diversity, and it was praised by pro-American groups who support lower immigration rates.

The National Immigration Law Center portrayed the regulation as an insult to poor people:

“The proposal is reckless, deeply unfair, and inconsistent with core American values. It is a massive backdoor change to decades of immigration law. It places wealth over family, denying ordinary working families a place in America. And it explicitly places a priority on well-off families and ignores families who have waited years to be reunited” said Olivia Golden, executive director of the Center for Law and Social Policy.

Pro-migration progressives also portrayed the reform as an attack on children, including the U.S-born children of recent migrants. In April, Washington state Gov. Jay Inslee complained about the pending regulation, writing:

The proposal is clearly intended to deny basic supports like food, health care and housing to lawfully present immigrants and their families — including millions of children and U.S. citizens — who pay taxes, work, go to school and contribute to our country’s economy.

Buses groups will oppose the law because it curbs the immigration which provides them with many additional workers, consumers and renters. FWD.us, a group formed by billionaire and multi-millionaire investors, declared:

But immigration reformers applauded the regulations needed to implement the existing law.

“This is long overdue,” said Mark Krikorian, the executive director of the Center for Immigration Studies, told the New York Times. For years, “this country has defined public charge in a fictional way in order to facilitate high levels of low-skilled immigration. But this is simply a 21st-century definition of what public charge is.” He continued:

This isn’t a moral issue …. A Honduran with a sixth-grade education level isn’t morally flawed, but he works three jobs and still can’t feed his family. Immigrants with low levels of skill are a mismatch for a modern society like ours.

According to the DHS statement:

Four million young Americans will join the workforce this year, but the federal government will also import 1.1 million legal immigrants, and allows an army of at least 2 million blue-collar and white-collar visa-workers to work U.S. jobs, alongside asylum-claiming migrants and illegal aliens.