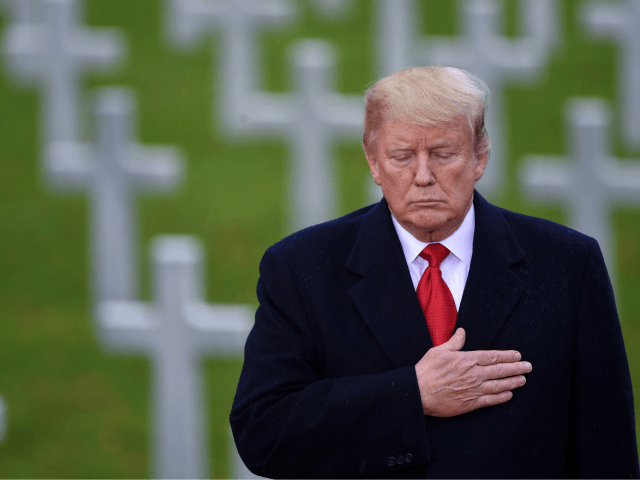 (AFP) — President Donald Trump paid tribute to the “great warriors” who died in World War I as he visited a U.S. cemetery in France, a day after drawing fire for cancelling a similar trip due to bad weather.

Speaking at Suresnes cemetery in the western Paris suburbs Trump hailed the “great warriors who gave everything for family, country, God and freedom”.

Trump, who is in Paris to attend ceremonies marking the centenary of the end of the war, also paid tribute to the French and other Allied troops killed in “one of the bloodiest conflicts in human history”.

Hailing the “American and French patriots” who served in the war, he said: “It is our duty to preserve the civilisation they defended and to protect the peace they so nobly gave their lives to secure one century ago.”

The US leader was heavily criticised for cancelling a trip to Belleau Wood battlefield in northern France on Saturday due to the rain, with some critics accusing him of disrespecting America’s war dead.

On Sunday, he braved the continuing wet weather to remember those who braved “rain, hail, snow, mud, poisonous gas, bullets and mortar” fire in pursuit of a “great, great victory”.

Speaking at an open-air podium, without an umbrella, he named World War II veterans present and thanked them each in turn.

Addressing one veteran, he joked: “You look so comfortable up there under shelter as we’re getting drenched. You’re very smart people!”

“You look so comfortable up there under shelter as we’re getting drenched, you’re very smart people” – Donald Trump thanks the Second World War veterans at the Suresnes American Cemetery #LestWeForget pic.twitter.com/zytIBPFXlb

Earlier, Trump joined dozens of other leaders, including Russian President Vladimir Putin, for a solemn ceremony hosted by President Emmanuel Macron at the Arc de Triomphe war monument on the Champs-Elysees.

Trump said he and his wife Melania were “deeply honoured” to have been in attendance.

“It was very beautiful, so well done,” he said.

Over 1,500 US soldiers who fought in World War I are buried at the hillside cemetery in Suresnes.

Some 2,289 others are buried at the Aisne-Marne American Cemetery next to Belleau Wood.