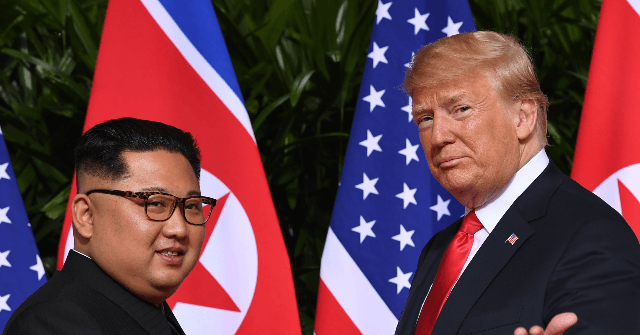 The General Assembly consists of all 193 members of the United Nations. Every September, the heads of state of every country, or their chosen representatives, are given the stage in the “general debate” to discuss any issue they deem worth bringing up to their peers.

The American president and leaders of the free world typically address the assembly. As traveling to the United Nations requires passing through New York, and sometimes New Jersey, the heads of rogue states sometimes skip out on attending for fear of being arrested for international crimes. Last year, the only prominent dictator in attendance was Nicolás Maduro of Venezuela. North Korea joined China, Russia, Vietnam, Cuba, Democratic Republic of Congo, and Syria, among others, in sending diplomats in place of their heads of state.

Congressman Park Ji-won of the centrist People’s party said Tuesday that he believes Kim may attend the General Assembly debate this year following his friendly exchange with Trump in Panmunjom this weekend, according to the English-language Korea Times.

“The summit (between Kim and Trump) at the Demilitarized Zone struck [sic] a big deal,” Park reportedly told a South Korean radio station. “Upcoming working-level talks will focus on drawing up a roadmap and timetable, based on which the two parties would move forward on an action-to-action basis.”

Assuming that Kim dismantled the Yongbyon Nuclear Scientific Research Center, believed to be the main location where North Korea enriches fissile material, “it’s not a pipe dream that Kim would speak at the U.N. General Assembly sometime in September, which would lead to another North Korea-U.S. summit, North Korea-South Korea-U.S. summit and eventually a four-party summit including China.”

The ultimate goal of such a four-way summit would be ending the Korean War, which technically remains ongoing as neither side ever signed a peace treaty. Given the participants in the hostilities, both Koreas, the United States, and China would have to sign a peace treaty for it to be valid.

Satellite images suggest that the Yongbyon complex is very much active in enriching uranium or other fissile materials. The North Korean regime claimed to have shut down another site, the Punggye-ri Nuclear Test Site, in May 2018, shortly before Trump’s first in-person meeting with Kim in Singapore. Punggye-ri is where Pyongyang conducted most of its bomb tests and many experts suggested that it had already been rendered unusable by the September 2017 nuclear weapon test, making the shutdown an empty gesture.

Following the abrupt end to Trump’s negotiations with Kim in Hanoi, Vietnam, this February, a senior North Korean diplomat claimed that Kim had offered to shut down Yongbyon in exchange for sanctions relief. Trump left the summit, he said, because he considered North Korea’s demands for sanctions relief unreasonable.

Park said that a deal with Washington could be very lucrative for North Korea, allowing international investment and an expansion of the nation’s fledgling tourism industry, something Kim has repeatedly made statements advocating in North Korean state media.

Park did not comment on the potential that such a deal could help perpetuate the Kim dynasty in power. Neither Trump or South Korean President Moon Jae-in have made substantial attempts to pressure Kim on improving the atrocious human rights situation in the country. Kim’s communist regime imposes a strict caste system on society known as “songbun,” which prevents those considered hostile to Kim from visiting the capital, having a stable job, or functioning in society. An estimated 130,000 political prisoners live in labor camps due to low “songbun,” many born in the camps and not even accused of dissent. Pyongyang imprisons an entire family for three generations if one dissident is found among them.

China, which also maintains concentration camps, has had no trouble integrating into the global market and attracting tourism, which seems to indicate that North Korea would also fail to struggle if an infusion of cash from sanctions lifting materialized.

The current sanctions on North Korea are meant to pressure the regime to end its illegal nuclear weapons program and stop threatening the United States and its neighbors, not to punish the regime for its human rights abuses.

Prior to Park’s remarks Tuesday, a Korea expert in Seoul told Radio Free Asia (RFA) that he, too, believed that Kim could make an appearance this year in New York.

“If the working-level talks go well, Kim Jong Un would probably want to visit the U.S. in September to give a speech at the U.N. General Assembly and have a summit with President Trump in Washington,” Shin Beom Chul, the director for the Center for Unification Security at the Ansan Institute for Policy Studies in Seoul, said.

Similar speculation followed Kim’s meeting with Trump in Singapore last June. The South China Morning Post cited several anonymous officials suggesting that U.N. Secretary-General Antonio Guterres was interested in inviting Kim to speak. Yet Kim did not show up, sending Foreign Minister Ri Yong-ho in his stead. Ri spoke in 2017 and 2016, as well.