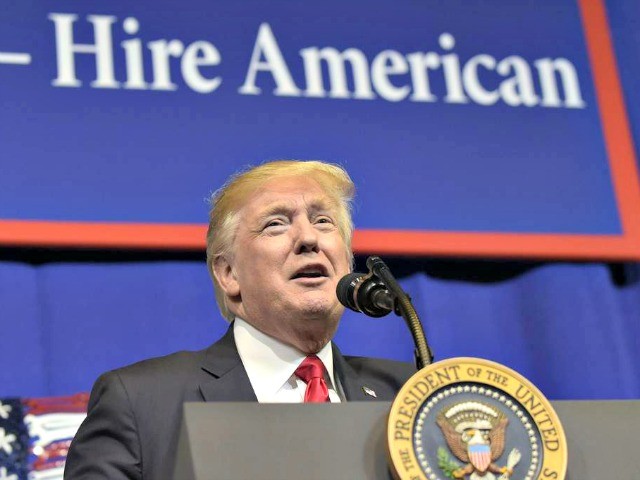 President Trump is following through on his “Buy American, Hire America” commitment, surging the arrests of illegal aliens hired by U.S. businesses by more than 640 percent over the last year.

For Fiscal Year 2018, the Immigration and Customs Enforcement (ICE) agency increased their worksite enforcement of immigration — going after the U.S. employers who hire illegal aliens over American citizens — their arrests of those illegal alien hires, and the number of investigations they opened.

“Reducing illegal employment helps build another layer of border security, and reduces the continuum of crime that illegal labor facilitates, from the human smuggling networks that facilitate illegal border crossings to the associated collateral crimes, like identity theft, document and benefit fraud and worker exploitation,” ICE official Derek Benner said in a statement.

“Employers who use an illegal workforce as part of their business model put businesses that do follow the law at a competitive disadvantage,” Benner said.

“These laws help protect jobs for U.S. citizens and others who are lawfully employed, reduce the incentive of illegal migration, eliminate unfair competitive advantages for companies that hire an illegal workforce, and ultimately help strengthen public safety and national security,” he said.

The number of worksite audits initiated by ICE totaled nearly 6,000, an increase of about 340 percent from Fiscal Year 2017.

Though criminal indictments and convictions remained relatively steady compared to years past, ICE officials say the numbers will rise, as many cases are pending. So far, 72 managers who hired illegal aliens were indicted this year and 49 managers were convicted of hiring illegal aliens over Americans.

This year, businesses hiring illegal aliens were ordered to pay more than $10.2 million in fines, forfeitures, and restitution. One Texas company was forced to pay more than $5.5 million after a five-year investigation by ICE revealed their illegal workforce.