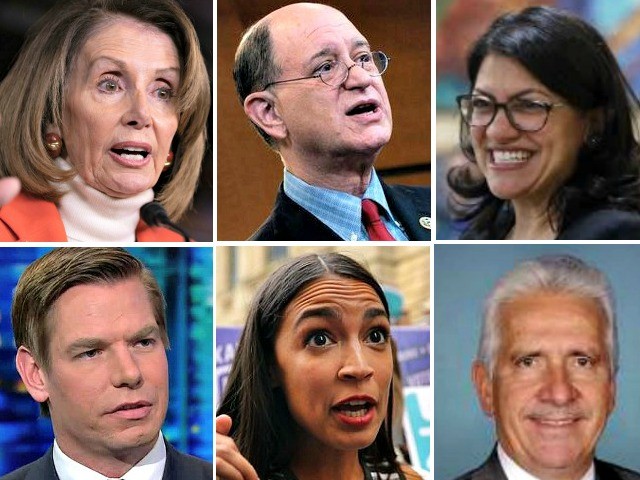 Democrats are sharply divided over whether and how to impeach President Trump, just days into taking control of the House.

In the leadup to the midterm election, House Speaker Nancy Pelosi (D-CA) tried to tamp down the idea Democrats want to take back the House to impeach Trump instead of focusing on legislation and oversight.

But on the House’s first full workday Thursday, some Democrats pounced, bringing the divide into the open.

Rep. Brad Sherman (D-CA) fired the first shot by introducing articles of impeachment against Trump that accused him of obstruction of justice by firing former FBI Director James Comey.

Today, I reintroduced Articles of #Impeachment against @realDonaldTrump with @RepAlGreen. I have not changed the text from the Articles I first introduced in July 2017. pic.twitter.com/LUkI6pyWiX

Rep. Rashida Tlaib (D-MI) was then videotaped at a reception telling her supporters: “We’re going to go in and impeach the motherf**ker!” to loud cheering.

Democrat Rashida Tlaib during her first day as a U.S. Congresswoman: “We’re going to go in and impeach the motherf**ker.” pic.twitter.com/hG538ZOQlb

However, other House Democrats quickly pushed back against impeachment talk.

Rep. Jim Costa (D-CA) rebuked Rashida Tlaib’s impeachment talk in comments to CNN: “It’s inappropriate — we can have our differences but we set a higher standard.”

Other high profile House Democrats who have led accusations of collusion against Trump have dismissed suggestions they would look to impeach him.

Rep. Eric Swalwell (D-CA), a member of the House Intelligence Committee, said the evidence was not there yet to impeach Trump.

“We’re going to look where Republicans were unwilling to look before, and build an air-tight case, if that’s what’s necessary, seek bipartisan buy-in, and make sure that if we go that way, the American people understand why,” he told CNN.

“But we should not be as reckless with the facts as Donald Trump is, and we should give him a fairer investigation that he deserves,” he said.

Rep. Ted Lieu (D-CA) called on Democrats to wait until Special Counsel Robert Mueller finished his investigation into whether the Trump campaign colluded with Russia.

“My view of impeachment is that, like the power to declare war, it is one of the gravest responsibilities of Congress. It should never be our first option. We should wait until Special Counsel Mueller completes his investigation,” he told CNN’s Situation Room on Thursday.

But a Tlaib spokesman signaled later in the day that neither she nor her constituents would back down.

“Congresswoman Tlaib was elected to shake up Washington, not continue the status quo. Donald Trump is completely unfit to serve as president. The Congresswoman absolutely believes he needs to be impeached. She ran and won by making this very clear to the voters in her district,” said Denzel McCampbell, a spokesman for Tlaib, according to NBC.

“Donald Trump’s actions have harmed the 13th Congressional District and this country, and Congresswoman Tlaib will not stay silent while this happens,” he said.