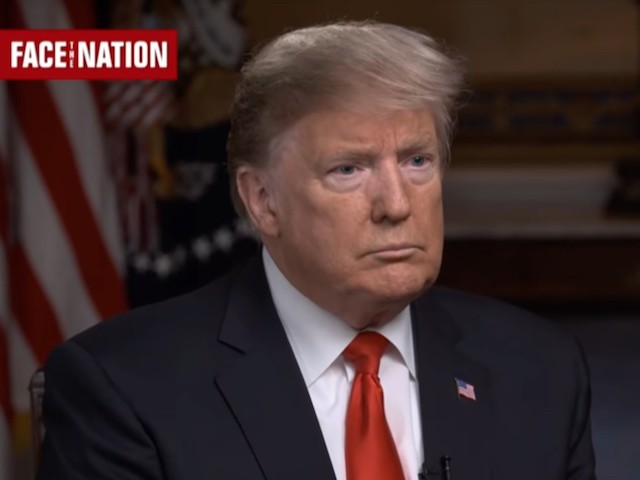 Sunday on CBS’s “Face the Nation,” President Donald Trump said he was not required to agree with the intelligence community.

TRUMP: –but when it was chosen– well, we spent a fortune on building this incredible base. We might as well keep it. And one of the reasons I want to keep it is because I want to be looking a little bit at Iran because Iran is a real problem.

BRENNAN: Whoa, that’s news. You’re keeping troops in Iraq because you want to be able to strike in Iran?

TRUMP: No, because I want to be able to watch Iran. All I want to do is be able to watch. We have an unbelievable and expensive military base built in Iraq. It’s perfectly situated for looking at all over different parts of the troubled Middle East rather than pulling up. And this is what a lot of people don’t understand. We’re going to keep watching and we’re going to keep seeing and if there’s trouble, if somebody is looking to do nuclear weapons or other things, we’re going to know it before they do.

BRENNAN: So you’re going to trust the intelligence that you receive?

TRUMP: I am going to trust the intelligence that I’m putting there, but I will say this: my intelligence people, if they said in fact that Iran is a wonderful kindergarten, I disagree with them 100 percent. It is a vicious country that kills many people. When you talk about torture and so many other things. And- maybe they’ll come back. The country is getting absolutely- when I ended the horrible Iran nuclear deal- it was a horrible deal done by President Obama and John Kerry that didn’t know what the hell he was doing. When I ended that deal, Margaret, all of a sudden Iran became a different country. They became- very rapidly- right now they’re a country that’s in big financial trouble. Let’s see what happens.

BRENNAN: I want to move on here but I should say your intel chiefs do say Iran’s abiding by that nuclear deal. I know you think it’s a bad deal, but–

BRENNAN: You disagree with that assessment?

TRUMP: –I have intel people, but that doesn’t mean I have to agree. President Bush had intel people that said Saddam Hussein–

TRUMP: –in Iraq had nuclear weapons- had all sorts of weapons of mass destruction. Guess what? Those intel people didn’t know what the hell they were doing, and they got us tied up in a war that we should have never been in. And we’ve spent seven trillion dollars in the Middle East and we have lost lives–

BRENNAN: Do you trust your national security adviser John Bolton because he worked in the Bush administration?

TRUMP: I do, and I respect John and John is not one of the people that happened to be testifying or on.