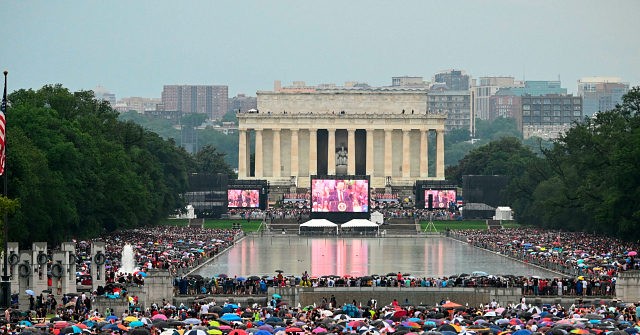 President Donald Trump delivered a patriotic speech on American greatness at the Lincoln Memorial in honor of Independence Day and highlighted American achievements and honored past patriots, including Betsy Ross.

“Devotion to our founding ideals led American patriots to abolish the evil of slavery, secure civil rights, and expand the blessings of liberty to all Americans,” Trump said at the “Salute to America” rally.

“This is the Nobel purpose that inspired Abraham Lincoln to rededicate our nation to a new birth of freedom and to resolve that we will always have a government of, by, and for the people,” he continued before mentioning the historical significance of Apollo 11. He even promised that the U.S. “will plant the American flag on Mars.”

He listed off a stunning number of American accomplishments in the patriotic speech — from the arts to the sciences.

“Our nation’s creativity and genius lit up the lights of Broadway and the sound stages of Hollywood,” Trump said. “It filled the concert halls and airwaves around the world with the sound of jazz, opera, country, rock and roll, and rhythm and blues.”

“It gave birth to the musical, the motion picture, the western, the World Series, the Super Bowl, the skyscraper, the suspension bridge, the assembly line, and the mighty American automobile,” he continued. “It led our citizens to push the bounds of medicine and science to save the lives of millions.”

The president also gave a shoutout to great patriots of the past, including Betsy Ross, whose early flag has been a point of contention in the public sphere.

“In 1963, Reverend Martin Luther King Jr. stood here on these very steps and called on our nation to live out the true meaning of its creed and let freedom ring for every citizen all across our land,” Trump continued:

“As long as we stay true to our course, as long as we remember our great history, as long as we never, ever stop fighting for a better future, then there will be nothing that America cannot do,” the president said.