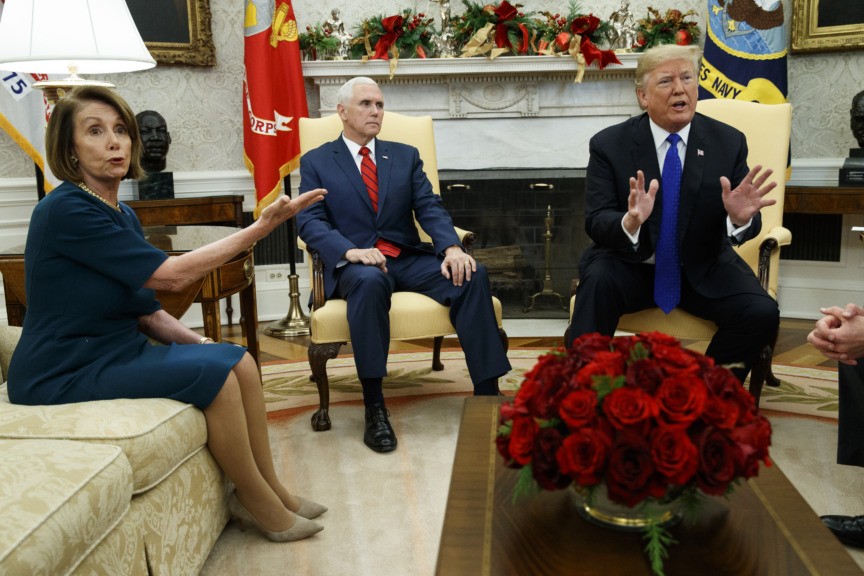 TEL AVIV – In an extraordinary on-camera spat with Democratic leaders Tuesday, President Donald Trump invoked a wall built by Israel in a threat to shut down the federal government if he doesn’t get the $5 billion needed to build his proposed wall between the United States and Mexico.

“I am proud to shut down the government over border security,” Trump said during a heated exchange in the White House Oval Office with House Minority Leader Rep. Nancy Pelosi (D-CA) and Sen. Chuck Schumer (D-NY), the minority leader of the Senate.

“If you really want to find out how effective a wall is, just ask Israel,” Trump said. “[It’s] 99.9 percent effective and our wall will be every bit as good as that, if not better.”

It was not immediately clear which wall Trump was referring to, the West Bank security barrier or Israel’s border fences — some of which are still in the process of being built.

The West Bank barrier, which Israel began constructing during the Second Intifada in 2002, has been largely credited with stemming the wave of terror attacks during the first half of the decade that claimed the lives of more than 1,300 Israeli civilians.

Prime Minister Benjamin Netanyahu has in the past said Israel’s wall on the border with Egypt, built to stem the flow of illegal African migrants, could serve as a model for the U.S.

A third wall, built with sophisticated tunnel detection technologies, has been established along the border with the Hamas-run Gaza Strip. Israel is also building a similar wall along its border with Lebanon in the north to prevent attacks from Lebanese terror group Hezbollah.

Trump has said that his proposed wall would prevent drug dealers and criminals from infiltrating the country.

The meeting marked the first since the Democrats won the House of Representatives in last month’s election.

Democrats have made it clear that they will not budge on the $1.6 billion earmarked for border security.

“You don’t have the votes,” Pelosi said.

“Elections have consequences, Mr. President,” stated Schumer. “We shouldn’t shut down the government over a dispute, and you want to shut it down.”

Pelosi added that come December 21, if Trump went through with his threat she would call it a “Trump shutdown.”

Trump later said he wasn’t averse to “owning” a possible shutdown. “If we have to close down the country (over) border security, I actually like that in terms of an issue,” he said.

….People do not yet realize how much of the Wall, including really effective renovation, has already been built. If the Democrats do not give us the votes to secure our Country, the Military will build the remaining sections of the Wall. They know how important it is!