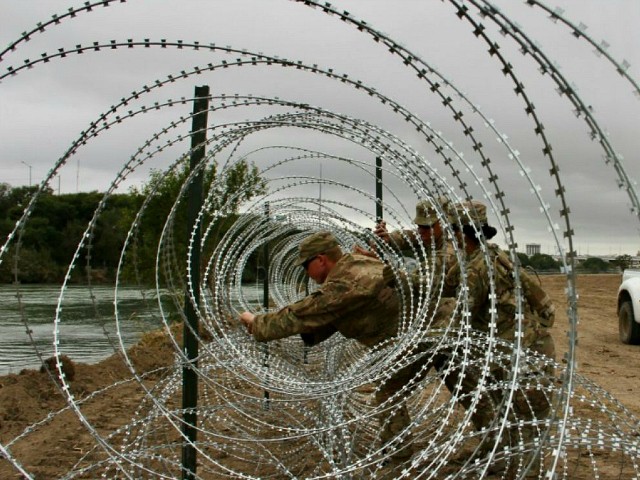 President Donald Trump has given Defense Secretary Jim Mattis the authority to allow troops at the Southwest border to perform “military protective activities” he deems necessary to protect troops and border patrol agents, according to a White House memo viewed by Breitbart News.

Those activities include “a show or use of force (including lethal force, where necessary), crowd control, temporary detention, and cursory search,” according to the memo, which was signed on Tuesday by White House Chief of Staff John Kelly.

“Department of Defense personnel shall not, without further direction from the President, conduct traditional civilian law enforcement activities, such as arrest, search, and seizure in connection with the enforcement of the laws,” it added.

Defense Secretary Jim Mattis said despite the new authorization, the current missions have not yet changed and that troops remain unarmed except for those whose specific job is to protect other deployed troops.

“There has been no call for any lethal force from [the Department of Homeland Security],” he told reporters Wednesday. “We don’t have guns in their hands right now other than a couple of [non-commissioned officers] who at any point … are armed for force protection.”

“So there is no armed element going in … I will determine it based upon what DHS asks for, and a mission analysis, and when we do that, we’ll let you know what it is,” he said.

He rejected that the new authorities are in violation of Posse Comitatus, the law that prohibits federal troops from performing law enforcement duties within the United States.

“The one point I want to make is, again, we are not doing law enforcement. We do not have arrest authority,” he said.

He said crowd control would consist of putting up Jersey barriers, and detention would be “in terms of minutes.”

Mattis said any new mission would depend on what the DHS needs and requests and that he would brief the press if there are any new missions. “We’re in support of DHS and the commissioner of Customs Border Protection,” he said.

The memo also said that Mattis could determine the duration of this deployment but shall consult with the Attorney General and the Secretary of Homeland Security prior to withdrawing troops.

The new authority comes amid reports of several thousands of Central American migrants now in Tijuana, Mexico, who were allegedly planning to overrun the border into California.

The memo said, “credible evidence and intelligence” indicate the caravans “may prompt incidents of violence and disorder that could threaten U.S. Customs and Border personnel and other United States government personnel performing the Federal functions necessary to secure and protect the integrity of the southern border.”

In light of this threat, the President has determined that it is necessary to use units and personnel of the Armed Forces of the United States (Department of Defense military personnel) at appropriate ports of entry to support the Department of Homeland Security by temporarily protecting U.S. Customs and Border Protection and other United States Government personnel and by protecting their performance of Federal functions.

Accordingly, the President has directed the Secretary of Defense to deploy appropriate numbers of Department of Defense military personnel to appropriate parts of entry to carry out this protection mission.