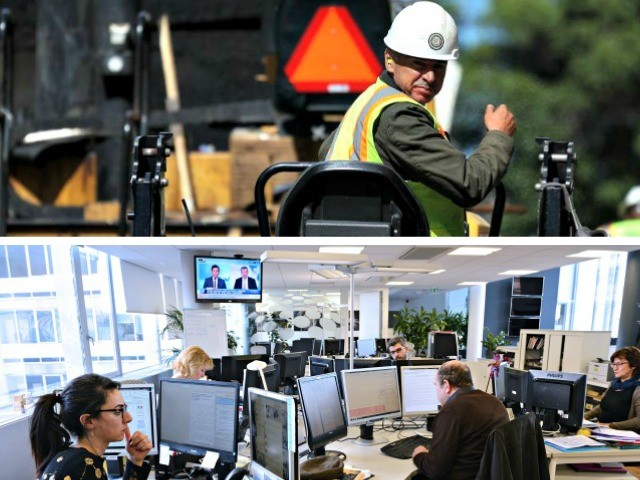 Salaries for college graduate Americans are growing much slower than for Americans who are working in transportation, restaurants, services, construction, and sales, according to federal data.

Average pay grew 3.0 percent in the 12 months up to December, according to the Bureau of Labor Statistics. However, employees in the broad “management, professional, and related” category gained only 2.5 percent.

The biggest gains were around Minneapolis, where extremely low unemployment forced wages up by 5.2 percent,

The rising wages tilt for blue-collar workers comes almost 30 years after the federal government passed the 1990 immigration bill to triple the inflow of legal immigrants to almost 700,000 each year. At the same time, Congress and Presidents from both parties passively welcomed the millions of illegal migrants who rushed across the Mexican border and into the blue-collar labor market. The federal flood of labor expanded the economy by suppressing blue-collar wages and boosting the stock market.

That flow of blue-collar migrants dropped sharply in 2008 when Congress and President George W. Bush pushed the real estate boom over a cliff. It fell further in 2017 as Trump announced his “Hire American” policy in his inauguration speech. Trump also tightened up border enforcement, sharply reduced the number of refugees and has denied numerous demands from business for more workers and more consumers.

So wages for Trump’s blue-collar base are rising amid  Trump’s combination of a fast-growing economy and a tight labor market.

But salaries for American college graduates have been flat for many years, partly because business groups have been allowed to import an army of roughly 1.5 million low-wage college-graduate visa workers.

Each year, the federal government allows companies to hire at least 500,000 visa-workers from Indian, Filipino, Chinese universities, for a wide range of software, engineering, healthcare, financial, accounting and management jobs. This flood of workers uses the H-1B, OPT, CPT, O-1, TN, L-1, E-3 programs to work long hours for low wages in the hope of eventually getting the hugely valuable deferred bonus of U.S. citizenship from the U.S. government.

Feds use a fake university to bust college-grad labor traffickers who funneled at least 600 Indian grads into jobs around the US. The trafficking was hidden within the quasi-legal workforce of 1.5 million H-1B, OPT, L-1, TN, etc. white-collar visa-workers. https://t.co/EBenDh5wE3

The citizenship bonus is worth millions of dollars for each migrant because it offers citizenship to the migrants, the spouse, their children, parents, in-laws, and all of their descendants. Most business would rather pay workers with that federal bonus instead of paying Americans with cash that would otherwise go to investors.

Most of the cheap visa workers are hired by information technology and healthcare CEOs to suppress payroll in the skilled software and medical sectors. The effort has been successful, partly because wages for employees in the information sector rose by just 4.6 percent since December 2017 despite massive demand, and hospital wages crawled up by just 2.6 percent.

But a survey by a job placement firm, Dice.com, says 2018 salaries for technology professionals rose by less than one percent:

Average annual salaries in 2018 remained flat, at $93,244. That’s a mere 0.6 percent increase from 2017. No wonder some 68 percent of respondents to Dice’s survey said they’d change employers to receive higher compensation. (Some 47 percent said they’d switch jobs for better working conditions, while 34 percent said they’d do so for more responsibility; another 22 percent thought they might lose their current position, necessitating a job switch.)

Poll ratings shows that Trump’s support is weaker among university graduates than among blue-collar workers.

In response, CEOs and investors are pressuring Trump to raise the inflow of cheap visa workers — and he is signaling agreement.

“We want future Americans to come to our country legally and through a system based on merit,” Trump said on January 25. He continued:

We need people to come to our country.  We have great companies moving back into the United States.  And we have the lowest employment and the best employment numbers that we’ve ever had.  There are more people working today in the United States than have ever worked in our country.  We need people to come in to help us — the farms, and with all of these great companies that are moving back.

Trump’s deputies are asking for an immigration wish list from companies, and that list will likely include large increases in white-collar guest workers.

But during the 2016 election, Trump repeatedly wooed voters with a promise of pro-American visa reforms. Computerworld reported:

“Companies are importing low-wage workers on H-1B visas to take jobs from young college-trained Americans,” he said at this rally. “You’ve been seeing that and you’ve been hearing that. We will protect these jobs for all Americans, believe me.”

In April 2017, Trump said his “Hire American” policy is intended to stop the displacement of Americans employees by visa workers.

That annual flood of roughly one million legal immigrants — as well as visa workers and illegal immigrants — spikes profits and Wall Street values by shrinking salaries for 150 million blue-collar and white-collar employees.

Immigration also steers investment and wealth away from towns in Heartland states because coastal investors can more easily hire and supervise the large immigrant populations who prefer to live in coastal cities. In turn, that coastal investment flow drives up coastal real estate prices and pushes poor U.S. Americans, including Latinos and blacks, out of prosperous cities such as Berkeley and Oakland.