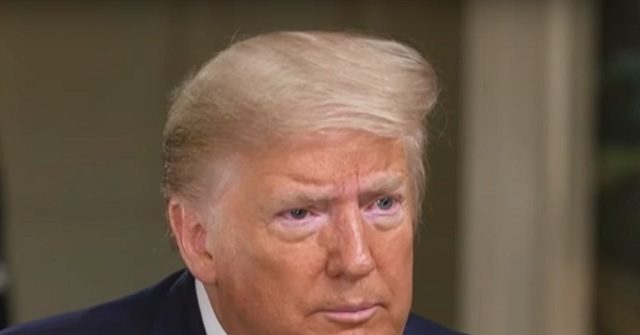 During an interview with Newsmax TV’s “Spicer and Co.” on Wednesday, President Trump stated that social distancing is needed, it’s too soon to go back to normal, and criticized Democratic elected officials for being “tough as hell on keeping people locked up in their houses” and “very weak” on handling riots and looting.

Trump responded, “No. It’s not over.”

He added, “We want to be back to normal, but it’s a little bit soon, but I watch these protesters, and they’re the ones that are all claiming social distancing, everything else, it’s really interesting. They do that, and then they’re jumping on top of each other by the thousands when they’re screaming and ranting and raving, which is not a good thing. I mean, we’re going to have to see how that works out.”

Trump also stated that it’s “very interesting with these liberal mayors, liberal Democrats — and governors, how they’re tough as hell on keeping people locked up in their houses. But when it comes to ending the crime and those stores being broken into, and the looting…they’re very weak on crime.”

He also said that the initial shutdowns were needed. Because without them, far more people would have died.