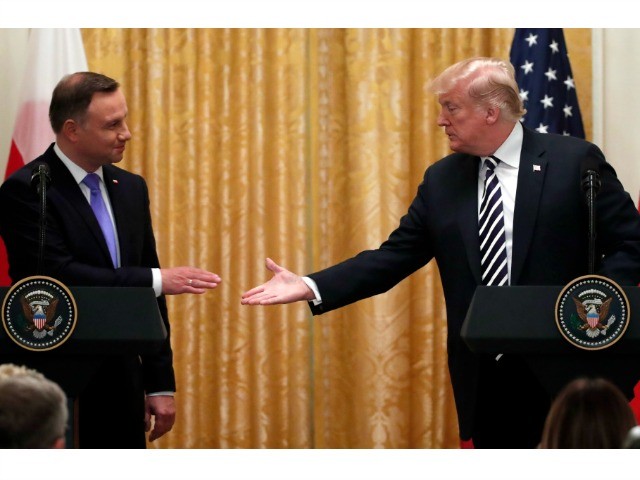 President Donald Trump said in Tuesday’s White House joint press conference with Poland’s President Andrzej Duda that the U.S. has “just started” dealing with China on trade and it should have been done a long time ago.

Trump’s response came after a reporter asked him if his trade tariffs police are working, given the U.S. trade deficit increase. “We’ve just started,” president Trump told the reporter. “This should have been done for the last 20 years.” He repeatedly said that something should have been done long ago to push back on China’s trade practices. He harkened back to the establishment of the World Trade Organization (WTO) 20 years ago, saying that China has taken advantage on trade through the organization since then.

China “rebuilt their country with tremendous amounts of money coming out of the United States,” said Trump. He said he does watch trade deficits, though they are not everything and not always exact.

“We’ve come to a conclusion with Mexico,” Trump said, pointing to the recently announced U.S.-Mexico Trade Agreement. That agreement is in the process of ultimate formation and journey through Congress. President Trump called it a “good deal for both parties.”

The U.S. and Canada have continued talks with the possibility that Canada could still join the U.S.-Mexico agreement or pursue a bilateral U.S.-Canada agreement. Trump said Canada has also taken advantage of the U.S., though he added, “We love Canada” and “the people of Canada.” He pointed, as he has before, to massive Canadian tariffs on dairy imports.

Trump then turned his attention to European Commission President Jean Claude Junker, calling him “a tough man,” “nasty,” and a “tough cookie.” Trump said he tried three times to get Junker to negotiate and Junker told him that the EU didn’t want to. Trump said he then told Junker that the U.S. would levy tariffs on European automobiles, and Junker then came to the negotiating table. “We now have some semblance of a deal,” said Trump.

He said the U.S. has been abused and taken advantage of by almost every country.

President Duda backed up President Trump by saying, through a translator, that the U.S. president is saying “America first” and he, as the president of Poland, is saying “Poland first.” He said they understand each other very well. Duda said Trump knows how to calculate very well and takes care of the United States. He spoke of a balance of trade exchange and a clash of interests, and emphasized it is important to make sure both countries win and lose as little as possible.

Early in the press conference, Trump recalled his trip to Poland and speech at the location of the Warsaw uprising. He thanked President Duda for Poland’s commitment to meeting the two percent defense spending threshold under NATO.

He remarked on Poland’s construction of a gas pipeline from Norway to Poland. He also commented that the U.S. is the largest producer of energy in the world.