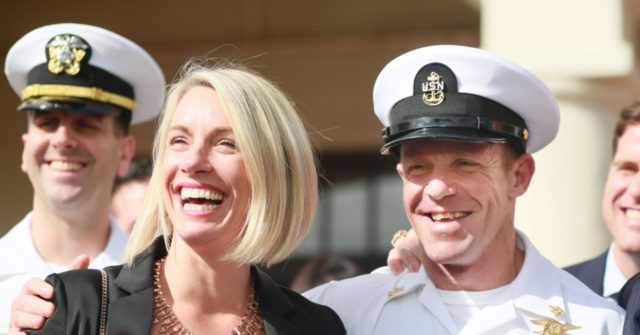 President Trump on Wednesday congratulated Navy SEAL Eddie Gallagher and his family on Tuesday’s military court ruling he is not guilty of murdering a wounded Islamic State fighter.

“Congratulations to Navy Seal Eddie Gallagher, his wonderful wife Andrea, and his entire family. You have been through much together. Glad I could help!” he tweeted.

Congratulations to Navy Seal Eddie Gallagher, his wonderful wife Andrea, and his entire family. You have been through much together. Glad I could help!

A military court in San Diego on Tuesday ruled Gallagher was innocent of six charges including the alleged murder of a wounded ISIS fighter and allegedly shooting at innocent civilians.

He was found guilty of one charge related to taking a photo with the corpse of the Islamic State fighter, which other platoon members did as well during their deployment in 2017 to Mosul, Iraq. The charge carries four months of jail time maximum, and since Gallagher has already served nine months in pre-trial confinement, he is not expected to serve any additional time.

Trump has previously expressed support for the Gallagher family. In March, he directed Gallagher to be released from pre-trial confinement to less restrictive confinement so that he could prepare for his defense.

In honor of his past service to our Country, Navy Seal #EddieGallagher will soon be moved to less restrictive confinement while he awaits his day in court. Process should move quickly! @foxandfriends @RepRalphNorman

In May, the New York Times reported Trump was allegedly considering a pardon for Gallagher, which prompted critics to accuse the president of wanting to pardon a “war criminal,” despite the presumption of innocence.

Former Secretary of State Hillary Clinton tweeted, “This is grotesque,” in response to the article. Clinton was under investigation for mishandling classified material related to her private home server. Then-FBI Director James Comey did not recommend charges.