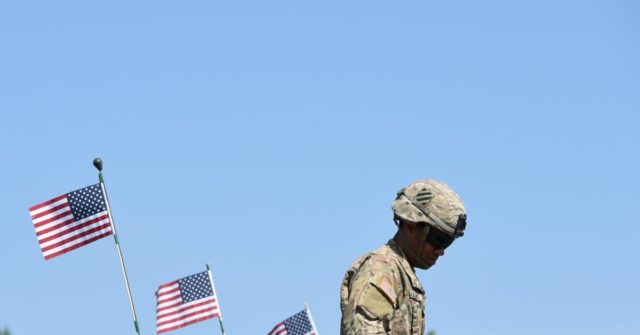 President Donald Trump confirmed Monday a major reduction in U.S. troop strength in Germany will go ahead as he faulted the “delinquent” NATO ally for failing to pay enough for its own defense.

“We’re putting the number down to 25,000 soldiers,” Trump said at the White House.

“We’re protecting Germany and they’re delinquent. That doesn’t make sense,” the president continued, referring to Germany’s failure to attain a goal set by all NATO members in 2014 to spend at least two percent of gross national product on defense by 2024. Germany says it hopes to reach two percent by 2031.

“Until they pay, we’re removing our soldiers, a number of our soldiers,” Trump said, noting America bears the burden of militarily defending Europe and gets precious little in return.

American facilities in Germany currently include Ramstein Air Base, a critical hub for operations in the Middle East and Africa and headquarters to the U.S. Air Forces in Europe and Africa; the Landstuhl Regional Medical Center, which has saved the lives of countless Americans wounded in Iraq and Afghanistan; and the Stuttgart headquarters of both the U.S. European Command and the U.S. Africa Command.

Now Trump is making good on his promise.

In his White House remarks to reporters, Trump noted the presence of American troops is a boost to local German commerce and they will now have to make do with less U.S. dollars circulating in their economies.

“Those are well-paid soldiers,” he said. “They live in Germany. They spend vast amounts of money in Germany. Everywhere around those bases is very prosperous for Germany. So Germany takes, and then on top of it they treat us very badly on trade.”

In addition to the 34,500 U.S. troops in Germany, there also are approximately 17,500 Defense Department civilians.

Former U.S. Ambassador to Germany Richard Grenell previously criticised Germany’s lack of participation in NATO global operations, telling Breitbart London as recently as 2018: “It is woeful; Germany is the largest economy in Europe. They made a commitment to NATO, and they should be serious about that commitment; it is a multilateral institution that guarantees the allies, guaranteeing freedom.”

Grenell also cited Germany’s general lack of military readiness, stating: “German military officials know that the readiness issue is a serious problem, there are no working submarines, for example; they don’t have a military that is currently ready.”

As the U.S. readies for its German withdrawal, that doesn’t mean a total absence from Europe.

Trump indicated last summer he could move some troops from Germany to Poland, telling Poland’s President Andrzej Duda during an Oval Office meeting, “Germany is not living up to what they’re supposed to be doing with respect to NATO, and Poland is.”

Duda has been trying to woo more American forces, even suggesting Poland would contribute over $2 billion to create a permanent U.S. base. In the current plan, at least some Germany-based troops are expected to be shifted to Poland.