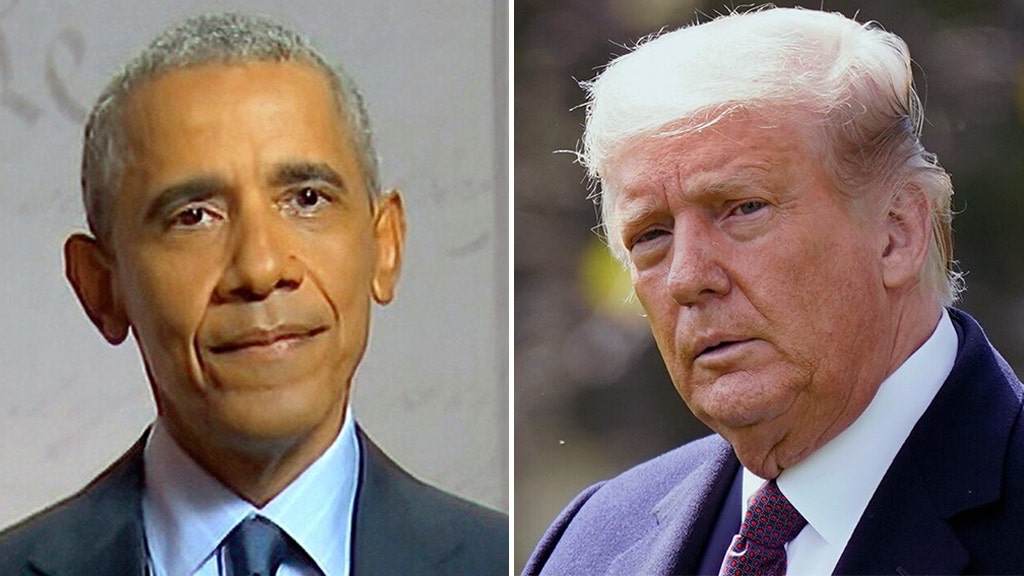 President Trump claimed that former President Obama is campaigning for him “every time he speaks,” after Trump’s predecessor slammed him at a rally for Joe Biden Wednesday night.

“Obama is campaigning for us. Every time he speaks, people come over to our side,” Trump wrote on Twitter. “He didn’t even want to endorse Sleepy Joe. Did so long after primaries were over!”

Obama endorsed Democratic nominee Joe Biden in April, when he was all but sure to win the nomination.

With Trump out of the White House, “you might be able to have a Thanksgiving dinner without an argument,” Obama told a socially-distanced crowd in Philadelphia. “You’ll be able to go about your lives knowing that the president is not going to retweet conspiracy theories about secret cabals running the world or that Navy Seals didn’t actually kill Bin Laden. Think about that. The president of the United States retweeted that. Imagine.”

It was Obama’s first stump speech for his former vice president this election cycle.

Teeing off on his successor, Obama said that Trump hasn’t shown interest in doing the work of the president or helping anyone but himself and his friends and treating the presidency like a reality show.

“And by the way, even his TV ratings are down, so you know that upsets him,” Obama said. “The thing is this is not a reality show, this is reality and the rest of us have had to live with the consequences of him proving himself incapable of taking the job seriously.”

TRUMP DOWNPLAYS OBAMA’S RETURN TO CAMPAIGN TRAIL, SAYS HE WAS ‘ALL OVER THE PLACE’ FOR CLINTON

And pointing to the coronavirus pandemic and the economy that it flattened, Obama said under Trump’s watch at least 220,000 Americans have died, more than 100,000 small businesses have closed, millions of jobs are gone.

“The only people truly better off than they were four years ago were the billionaires who got his tax cuts,” he said.

Meanwhile in North Carolina, Trump told supporters it “took forever” for Obama to publicly support Biden’s bid for the presidency. The president detailed a conversation with a staffer who said Obama’s comeback could be “bad news” for his re-election campaign.

“Somebody said, ‘Sir, maybe this isn’t good. President Obama’s campaigning for sleepy Joe Biden.’ I said, ‘That’s good news or bad news? Tell me, are you saying it’s good or it’s bad?’ ‘Well, I guess it’s bad.’ No, it’s good,” Trump said at the rally. “There is nobody that campaigned harder for ‘Crooked’ Hillary Clinton than Obama. He was all over the place.”