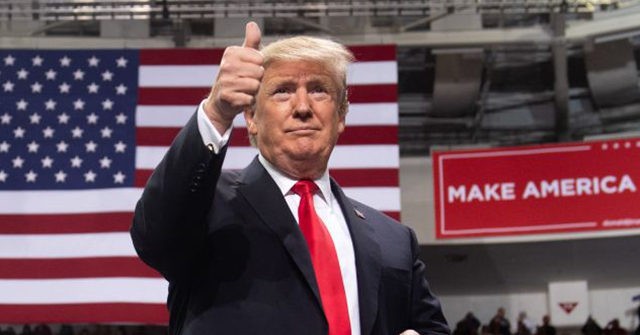 President Donald Trump’s campaign is reportedly planning to resume its iconic rallies after a months-long halt due to the coronavirus pandemic.

According to Politico’s report, upcoming rallies are in the works. The campaign hopes to resume the rallies as early as this month, but details and safety precautions moving forward are still under review.

“Aides are factoring in an array of factors in determining where the rallies will be held, including the number of coronavirus cases that exist locally,” the outlet reported:

While Trump is likely to face blowback for resuming in-person events while the coronavirus pandemic is still ravaging the country, his advisers contend that the recent massive protests in metropolitan areas will make it harder for liberals to criticize him.

“Americans are ready to get back to action and so is President Trump. The great American comeback is real and the rallies will be tremendous,” Trump campaign manager Brad Parscale said in a statement, according to Politico.

“You’ll again see the kind of crowds and enthusiasm that sleepy Joe Biden can only dream of,” he added.

President Trump has not held a MAGA rally since March 2 and canceled the scheduled rallies in Colorado and Nevada as the coronavirus pandemic continued to unfold.

The last rally took place in Charlotte, North Carolina — the same city where the Republican National Convention was originally slated to take place. However, Trump has indicated that they are looking elsewhere after local officials failed to guarantee the convention could proceed as planned, citing coronavirus-related concerns.