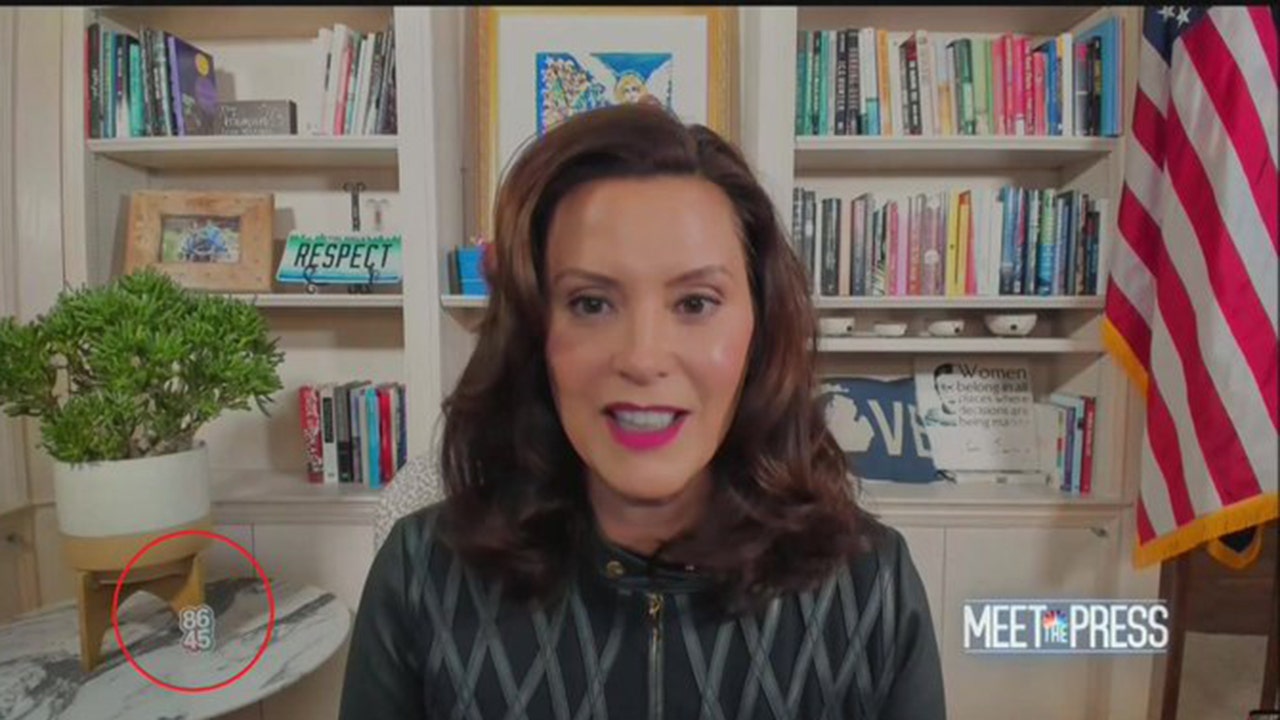 Michigan Gov. Gretchen Whitmer has been accused of encouraging assassination attempts on President Trump after displaying “8645” in the background of a national television interview Sunday.

Appearing on NBC’s “Meet the Press,” the Democratic governor spoke from Lansing, Mich., about her state’s coronavirus restrictions and slammed Trump’s response to the pandemic, all while the digits “8645” in bubble letters were perched by a house plant on a coffee table behind her.  The numbers prompted a reaction from one of the Trump campaign’s verified Twitter accounts.

“Governor Gretchen Whitmer displayed an ’86 45′ sign during her TV appearance,” Trump War Room tweeted, adding: “86 can be shorthand for killing someone.”

“Whitmer is encouraging assassination attempts against President Trump just weeks after someone sent a ricin-laced package to the White House,” the account wrote.

Shortly after Supreme Court Justice Ruth Bader Ginsburg’s death, the FBI and the U.S. Secret Service intercepted an envelope addressed to the White House containing the deadly substance ricin. A woman from Quebec was arrested at the U.S.-Canada border days later and is now facing federal charges in connection to the case.

Tori Saylor, deputy digital and creative director for Whitmer, retweeted an account praising the governor for placing the digits “8645” in the background of the interview. The tweet included a screenshot of Whitmer during the NBC TV spot, and read: “Bright and beautiful. Nothing but respect. RBG. 8645. Nice plant, too. 10/10,” before tagging the governor.

It was unclear from the tweet what the numbers meant to convey, but, colloquially the term “86” is slang for canceling someone, killing someone, or ejecting someone, sometimes from a bar or restaurant. Meanwhile, Trump is the 45th president of the United States.

Neither Whitmer’s office nor the Trump campaign immediately returned a Fox News request for comment.

During the interview, Whitmer also reacted to a video clip showing Trump at a campaign rally in Muskegon, Mich., on Saturday, where the president told the crowd “you gotta get your governor to open up your state,” adding “you gotta get your schools open.”

The crowd then chanted, “Lock her up,” referring to Whitmer, before Trump added, “Lock them all up.”

“It’s incredibly disturbing that the President of the United States — 10 days after a plot to kidnap, put me on trial, and execute me — 10 days after that was uncovered, the president is at it again and inspiring, incentivizing and inciting this kind of domestic terrorism,” Whitmer said, reacting to the clip. “It is wrong. It has got to end – not just for me and my family but for public servants everywhere who are doing their jobs and trying to protect their fellow Americans.”

Saylor also tweeted a similar video from Trump’s campaign rally, writing, “I am the Governor’s Deputy Digital Director. I see everything that is said about and to her online. Every single time the President does this at a rally, the violent rhetoric towards her immediately escalates on social media. It has to stop. It just has to.”

This comes two weeks after the FBI uncovered an alleged plot organized by members of anti-government militia groups to kidnap Whitmer before Election Day, as well as to target and kill law enforcement and execute an armed raid on the Michigan Capitol.

After federal prosecutors and the state attorney general announced the arrests, Whitmer made public statements blaming Trump for allegedly encouraging domestic terrorists to use violence against her and other politicians. She referenced comments the president made during the first debate against Joe Biden, when he told members of the far-right group the “Proud Boys” to “stand back and stand by.”

“Just last week, the president of the United States stood before the American people and refused to condemn white supremacists and hate groups, like these two Michigan militia groups. ‘Stand back and stand by,’ he told them. ‘Stand back and stand by.’ Hate groups heard the president’s words, not as a rebuke, but as a rallying cry, as a call to action,” Whitmer said. “When our leaders speak, their words matter. They carry weight. When our leaders meet with, encourage, or fraternize with domestic terrorists, they legitimize their actions, and they are complicit.”