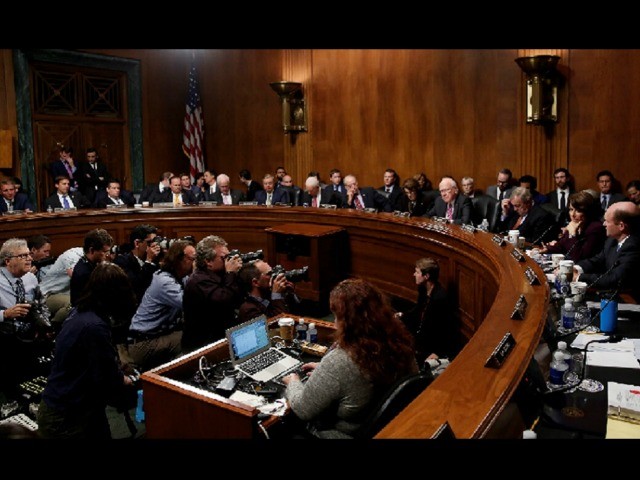 WASHINGTON, DC – President Donald Trump broke the all-time two-year record last week for appointing judges to the federal appeals court and immediately nominated more, while the Senate Judiciary Committee continued this Wednesday to advance still more nominations ahead of the midterm elections, and will hold another hearing next week.

Last year the president broke the all-time record for first-year judicial appointments to the federal appeals courts, when the Senate confirmed 12 of his nominees. The White House immediately made clear to supporters that it would double-down, attempting to break the two-year record by the end of the president’s second year.

The president did so last Wednesday, when Sen. Mitch McConnell (R-KY) forced through a deal with Sen. Chuck Schumer (D-NY) to confirm 15 judges, including three appellate judges and 12 federal district judges (for the trial-court level). Otherwise, McConnell would have kept the Senate in session. This way, vulnerable red-state Democrats can go home to campaign for re-election.

Over 99 percent of federal cases end before the Supreme Court. The 13 U.S. courts of appeals decide over 23,000 appeals per year. The Supreme Court receives about 7,000 petitions annually to review appellate decisions, but that number of 7,000 includes appeals from state supreme courts as well as federal appeals courts. Of that entire number, the nation’s highest court takes and decides less than 80 cases per year. The federal appellate bench is thus almost always the last word on a federal legal issue.

All told, the Senate has confirmed 29 judges to the courts of appeals, and is expected to break into the 30s. The Senate is lagging behind on district court nominees, because those have traditionally been unanimously confirmed by the Senate, but once President Trump took office, Democrats began demanding cloture votes and lengthy floor debates on most nominees.

Immediately after the confirmations, the president nominated his 18th wave of judicial nominees, including five more to the appellate courts.

Sen. Chuck Grassley (R-IA) is moving forward as chairman with hearings of his Senate Judiciary Committee on still more judicial nominees, even while the Senate is in recess. Conservatives are cheering Grassley’s move, and encouraging him to keep moving at this swift pace.

Wednesday, the committee held a hearing for one appellate nominee and five district court nominees. Sens. Orrin Hatch (R-UT) and John Kennedy (R-LA) were the only ones in attendance, with their colleagues back in their home state.

Kennedy asked tough questions for the appellate nominee: Allison Jones Rushing, nominated to the U.S. Court of Appeals for the Fourth Circuit, to whom even the left-wing American Bar Association (ABA) gave a rating of “qualified,” and a minority of the reviewers voting her “well-qualified.” Rushing responded that while she has only 11 years legal experience since graduating from the elite Duke Law School, those years include clerking for Justice Neil Gorsuch when he was still an appeals judge on the Tenth Circuit, for the esteemed Judge David Sentelle on the D.C. Circuit, for Justice Clarence Thomas on the U.S. Supreme Court, and also is currently a partner at the global heavyweight firm Williams & Connelly.

Rushing is universally acknowledged as a brilliant lawyer, one who is being targeted by left-wing activist groups because she is a devout Christian. This discrimination is identical to that leveled against Judge Amy Coney Barrett who serves on the Seventh Circuit, Judge Kyle Duncan who serves on the Fifth Circuit, and Russ Vought, who is deputy director of the White House Office of Management and Budget.

Democrats have repeatedly shot themselves in the foot for targeting President Trump’s nominees because of their faith, which violates the Constitution’s Religious Test Clause. Republicans by contrast have repeatedly reaped political rewards for standing by those nominees, and are expected to do so by supporting Rushing as well.

Grassley announced a hearing for next Wednesday as well, in which his committee will interview five more nominees, including two picks for the federal appeals courts.

President Trump’s picking conservative judges was the top issue for 21 percent of voters in 2016, an issue on which he and Republicans enjoy a massive 16-point polling advantage of Democrats, 57 to 41.