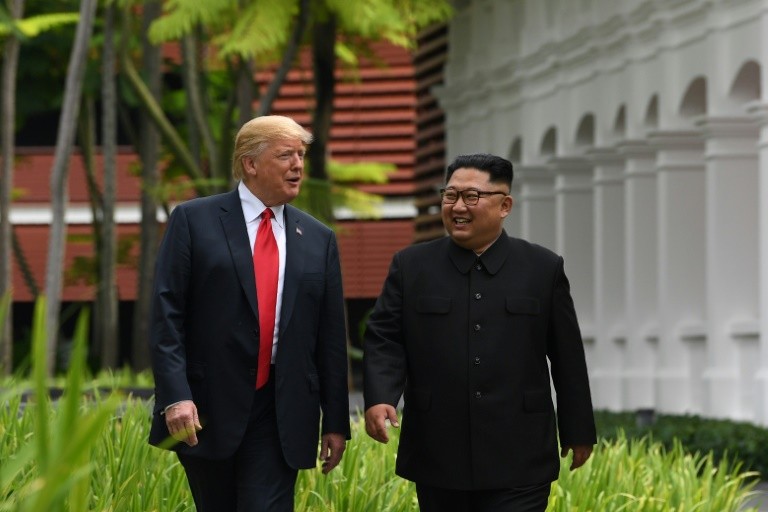 President Donald Trump hit former President Obama Saturday for giving away billions to Iran while he has given nothing but a meeting to North Korea and seen tangible progress.

“Yes I agree the rhetoric was unbelievably harsh in the beginning, but we have a very good relationship,” Trump admitted. “We were going to war with North Korea. That was what was going to happen. Millions of people would have been killed.”

He mentioned as he has before, President Barack Obama’s comments to him during the presidential transition. Obama alerted Trump to the urgent pressing problem of North Korea.

“I like him, he likes me. am I allowed to say that?” Trump said of North Korean chairman Kim Jong-Un. “We’ve come a long way.”

“Now I’m not saying what’s going to happen,” the president made clear. He said his meeting with Kim is “driving them crazy,” apparently referring to the media.

“Now Obama with the Iran deal gave them 150 billion dollars and gave 1.8 billion in cash, in cash, in cash, you know how much money that is? and nobody said he gave up too much, except me, that’s why I ended the [Iran nuclear] deal. I ended it,” said Trump.

“I was really being tough and so was he,” Trump said of early interactions with Chairman Kim. “We would go back and forth and then we fell in love, ok? K?” His comments elicited laughter from the crowd. “No really, he wrote me beautiful letters. and they’re great letters. we fell in love,” said Trump who mocked the media. He predicted the media would report him saying he and Kim fell in love and call Trump’s comment not “presidential.”