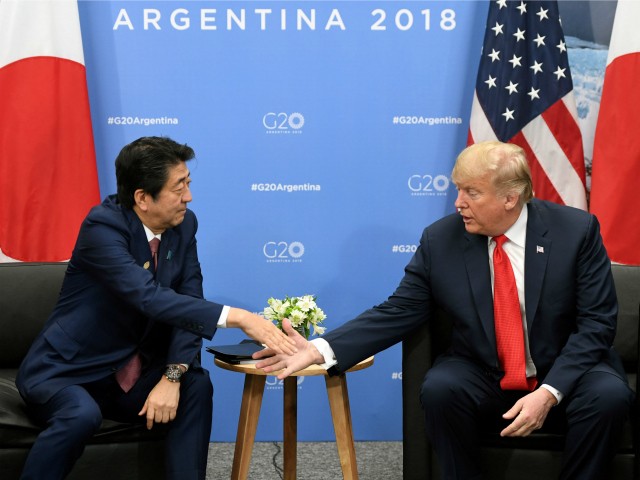 President Donald Trump and Japanese Prime Minister Shinzo Abe heralded their “robust” relationship as they prepared to meet on issues including trade and North Korea at the G20 summit in Argentina Friday.

“We have many things that we’ll be talking about, in particular, protection, military-type,” said President Trump. “Also trade. We’re doing a lot of business with Japan in trade. The deficit is coming down. It’s a massive deficit between Japan and the United States, and it’s coming down.”

“Japan is buying large amounts of our fighter jets — F-35s and others — and we appreciate it very much, but they are really working with me on trying to balance our deficit because we do have a deficit that’s pretty substantial with Japan,” Trump went on. “We hope that we’re going to be balancing it very quickly.”

We’re two countries that are doing very well in many different ways — military working together having to do with working with North Korea and other factors really has been very strong. Our partnership has been quite extraordinary, and we will be together for a long time. I think probably there’s no time in our history where we’re closer, and I’ll be going to a tremendous event in Japan. I was very honored to be invited. New Emperor.

Prime Minister Abe followed, congratulating President Trump, through a translator, for “a historic victory in the midterm election in the United States.”

“You rightly mentioned the alliance between Japan and the United States has become more robust than ever,” said Abe, according to the translator. “Having another round of summit meetings on the margins of this G20 summit is actually a symbol of the robustness of our alliance.”

“Every time … we see each other, we always have a very candid discussion, and today, I look forward to having another candid discussion with you on the regional affairs including North Korea as well as Japan-U.S. economic relations — of course, including our trade relations and other important topics.”