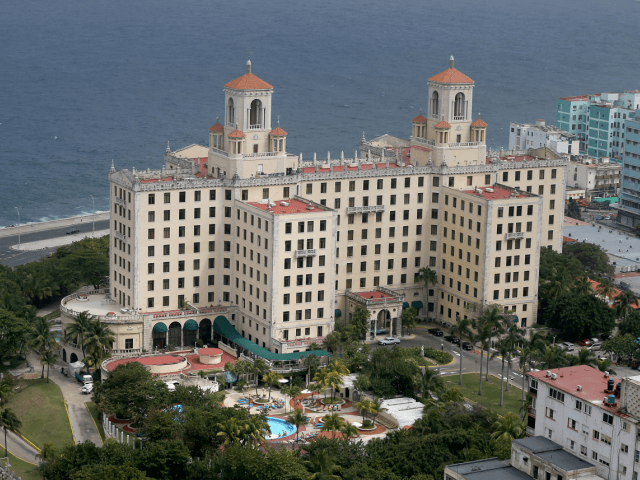 The State Department announced Wednesday that it would add another 26 entities, including 16 hotels, to its “Cuba Restricted List,” generally barring Americans from doing business with those entities.

The hotels and other businesses in question are those known to be owned by the Cuban military, which directly engages in human rights abuses throughout the Western Hemisphere.

The ban on the new entities will become active on Thursday.

“The Cuba Restricted List contains entities and subentities controlled by the Cuban military, intelligence, and security services or personnel,” the State Department confirmed in a statement. “Direct financial transactions with these entities and subentities are generally prohibited because they would disproportionately benefit those services or personnel at the expense of the Cuban people or private enterprise in Cuba.”

The list of hotels, many owned by the Cuban military subsidiary Gaviota SA, span the island from Havana to eastern Holguín and Santiago de Cuba. It also includes hotel projects still in construction, such as the Havana Paseo del Prado, scheduled to open in 2020.

Last year, the Trump administration banned Americans from a list of 80 hotels on the island, as well as prohibiting business transactions with dozens of seemingly independent businesses tied to the Castro regime.

Cuba’s military began investing more aggressively in hotels and other tourist attractions following then-President Barack Obama’s announcement in 2014 that the U.S. government during his tenure would issue the communist Cuban regime extensive financial and diplomatic concessions in exchange for no known benefits to the United States. According to a 2015 report, Gaviota, the military subsidiary, reportedly prepared an expansion aspiring to build 30 new hotels nationwide by 2018. Since President Donald Trump succeeded Obama, however, America has returned to a position of opposition to the regime and increased pressure on government officials to abandon its policy of human rights abuses against pro-democracy dissidents. This has prompted a decline in interest surrounding tourism to the island.

Tourism to Cuba for American citizens remains illegal. As the Treasury Department explains, Americans can travel to Cuba for a limited set of activities, including family visits, journalistic activity, and “support for the Cuban people.” Those who had already reserved rooms at the hotels sanctioned this week will be allowed to transact with those financial entities “provided that those travel arrangements were initiated prior to the State Department’s addition of the entity or subentity to the list.”

The sanctions also do not forbid some forms of tourism to the island, such as taking cruises from the United States to the island, if they are described as belonging to one of the proscribed legal categories allowed. The Cuban military does not own the ports where companies like Carnival dock their ships, though the Cuban government does after having stolen many of the docks from their U.S. citizen owners in the 1960s. Cuban-Americans in Florida have begun a campaign to discourage the use of cruises to travel to the island, noting that the companies making the trips are profiting through the use of stolen property.

Reports this month suggested that the Trump administration is considering an exception to the Foreign Sovereign Immunities Act (FISA) that would allow Americans to sue the Cuban state in court over post-Revolution expropriations.

The Cuban regime, currently embroiled in a dispute with the incoming conservative government of Brazil over its slave doctor program, has not responded to the American sanctions. On Wednesday, however, the Cuban Ministry of Foreign Relations (MINREX) did publish photos of the nation’s second-in-command, “President” Miguel Díaz-Canel, bowing to the tomb of Karl Marx.

The State Department’s announcement of new sanctions followed a speech by National Security Advisor John Bolton this month announcing that the Trump administration would increase its activity against the Castro regime, its proxy government in Venezuela, and allies in Nicaragua.

“This Troika of Tyranny, this triangle of terror stretching from Havana to Caracas to Managua, is the cause of immense human suffering, the impetus of enormous regional instability, and the genesis of a sordid cradle of communism in the Western Hemisphere,” Bolton told an audience in Miami. The senior official vowed “concrete” actions including sanctions against Cuban military corporations and Venezuela’s gold industry.

The Cuban military is heavily involved in the affairs of allied leftist governments in Latin America. Estimates from 2017 suggest that nearly 100,000 Cuban government agents are currently operating in Venezuela to aid dictator Nicolás Maduro. This week, Nicaragua approved the positioning of a Cuban military deployment in the country for “humanitarian” reasons.