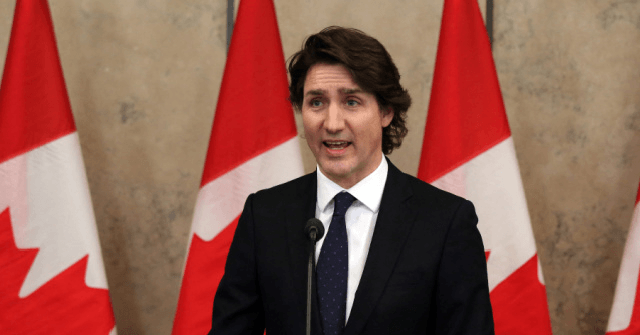 Canadian Prime Minister Justin Trudeau told Canadian trucker protesters, “you are breaking laws,” as the Freedom Convoy has created a blockade on the Ambassador Bridge, a key shipping route for U.S.-Canada trade.

Trudeau said the protesters are seeking to take the economy hostage. He made a distinction between the truckers and those who are fatigued with his onerous public health mandates, even though the protests started due to Trudeau’s mandates.

The Freedom Convoy is a group of truckers who peacefully protest the coronavirus vaccine mandates and other public health regulations implemented by Trudeau. For example, truckers must show proof of vaccination if they want to travel across the Canadian border as of January 15. After traveling to Canada’s capital city, Ottawa, in protest, the truckers made their way to the Ambassador Bridge between Ontario and Detroit on Monday.

“I want to make something very clear,” Trudeau told reporters on Friday. “The illegal blockades seeking to take our neighborhoods and our economy hostage and the collective COVID fatigue we are facing are two very separate things.”

Trudeau then warned the truckers that they could lose their license or ability to travel to the United States because they participated in the protests.

“If you joined the protests because you’re tired of COVID you now need to understand you are breaking laws. The consequences are becoming more and more severe,” he warned. “You don’t want to end up losing your license, end up with a criminal record which will impact your job, your livelihood, even your ability to travel internationally, including to the U.S.”

The Ambassador Bridge shipping route accounts for at least 25 percent of trade between the United States and Canada.

“We’ve heard your frustration with COVID with the measures that are there to keep people safe. We’ve heard you, it’s time to go home now,” Trudeau said.