After threatening to freeze truckers’ corporate accounts, Freeland then warned that truckers’ vehicle insurance would also be suspended.

“The insurance on your vehicle will be suspended,” she said. “Send your semi trailers home, the Canadian economy needs them to be doing legitimate work, not to be illegally making us all poor.”

“If your truck is being used in these illegal blockades, your corporate accounts will be frozen, the insurance on your vehicle will be suspended.” pic.twitter.com/iv1K8VDhAL

The Freedom Convoy of truckers has been peacefully protesting Trudeau’s vaccine mandates for nearly one month after the prime minister required proof of vaccination to be shown at the Canadian border. The truckers made their way to Canada’s capital city, Ottawa, and shut down border crossings in British Columbia, Manitoba, and Alberta.

Notably, the Freedom Convoy held a blockade of the Ambassador Bridge, which connects Ontario to Detroit and accounts for one-quarter of the trade between Canada and the United States.

“The blockades are harming our economy and endangering public safety. We cannot and will not allow illegal and dangerous activities to continue,” Trudeau said at Monday’s press conference.

Trudeau invoked the emergency powers one day after his government cleared the Ambassador Bridge on Sunday following a weekend-long blockade.

According to the BBC:

The Emergencies Act, passed in 1988, demands a high legal bar to be invoked. It may only be used in an “urgent and critical situation” that “seriously endangers the lives, health or safety of Canadians”.

Trudeau promised the emergency powers would be “time-limited, geographically targeted, as well as reasonable and proportionate to the threats they are meant to address.” 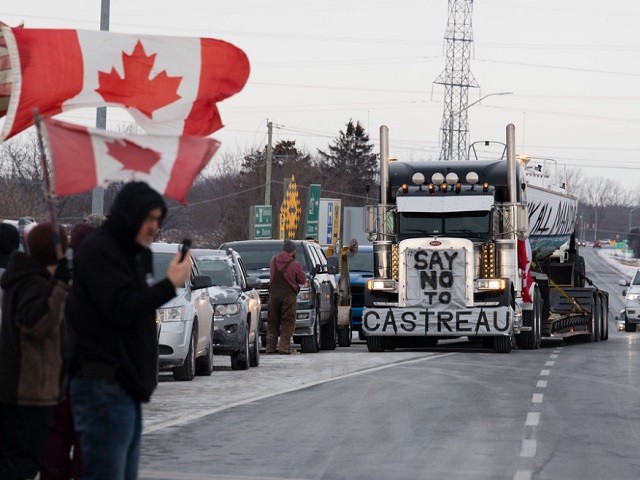 The emergency powers grant banks the power to freeze certain individuals’ corporate and personal accounts without a court order.

The government is issuing an order with immediate effect under the Emergencies Act, authorizing Canadian financial institutions to temporarily cease providing financial services where the institution suspects that an account is being used to further the illegal blockades and occupations. This order covers both personal and corporate accounts.

On the same day Trudeau threatened to freeze the freedom convoy trucker’s assets, Ontario Premier Doug Ford announced the end of his province’s vaccine mandate. Beginning March 1, Ontario residents will no longer be required to show proof of vaccination to attend events, access gyms, and eat at restaurants.

Ford did not credit the Freedom Convoy when announcing the lifted restrictions. “Let me very clear: We are moving in this direction because it is safe to do so. Today’s announcement is not because of what’s happening in Ottawa or Windsor but despite it,” Ford said about the Freedom Convoy’s protests.