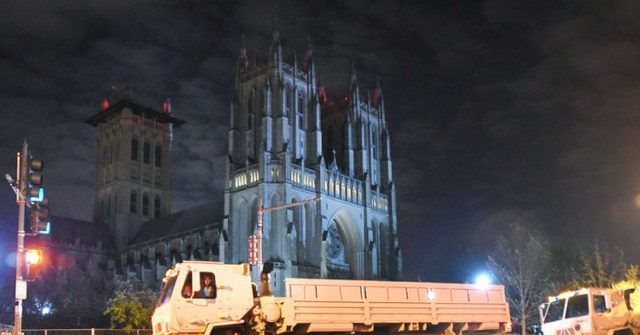 American troops were spotted heading into Washington DC in military trucks around sunset earlier today. In a Facebook post, the National Guard confirmed it has been activated in the D.C. area.

The trucks were spotted and recorded on video by a reporter for WTOP, a local D.C.-area news station.

“Looks like National Guard/Army is heading towards the protests now. This was minutes ago on 15th Ave New,” said the reporter at 8:51 p.m. eastern time.

Looks like National Guard/Army is heading towards the protests now. This was minutes ago on 15th Ave NW pic.twitter.com/KU4BPt2fOU

The short video clip shows four trucks full of troops heading into the city. It’s unclear if more followed behind.

Statement from the Commanding General:

The District of Columbia National Guard (DCNG) has been activated at the direction of the Secretary of the Army in response to a request for assistance from the U.S. Park Police to help maintain order during protests in the vicinity of the White House.

The DCNG is always ready to assist District and Federal agencies to protect human life and property. The DCNG is especially trained and equipped for this U.S. Park Police support mission and we proudly accept it.

Violent clashes and riots continue around the U.S. today, including in the nation’s capital. Protesters clashed with Secret Service members clad in riot gear outside the White House earlier today, ignoring orders to disperse.

The violent mob threw objects at the officers and tore down barricades. In video clips of the clashes, one protester could be seen holding a sign bearing the slogan “The People Want Blood.”

This is the second day of violent protests outside the White House. At last night’s protests, protesters successively attacked two journalists, including Breitbart News reporter Matthew Perdie as they attempted to film the ongoing unrest.

Officials in Minnesota, where the violent riots began, said they would use “contact tracing” to determine the instigators of violence.

Meanwhile, President Trump praised his supporters for their racial inclusivity.