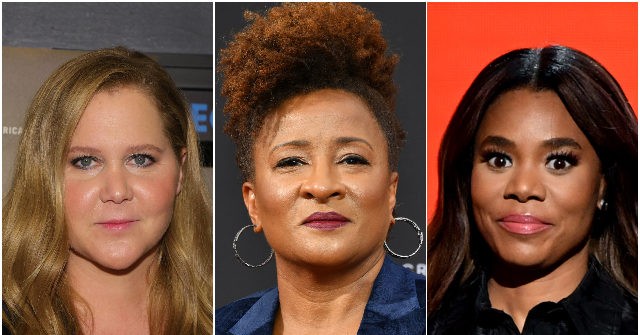 The Academy Awards is about to get a triple dose of left-wing wokeness as Amy Schumer is reportedly set to host this year’s Oscars ceremony along with comedian Wanda Sykes and Scary Movie star Regina Hall. Together, they have smeared Trump voters as racists, demanded the rollback of voter identification requirements, and joined forces with Michelle Obama to push vote by mail.

It will mark the first time that ABC’s ratings-challenged broadcast will feature a host since 2018.

Amy Schumer, Regina Hall, and Wanda Sykes will share hosting duties for the March 27 ceremony, according to multiple reports. The Academy of Motion Picture Arts and Sciences hasn’t confirmed the news but is expected to make an official announcement Tuesday.

This year’s ceremony will also mark a return to the Dolby Theatre in Hollywood after last year’s festivities were relegated to Union Station in downtown L.A. due to coronavirus restrictions.

The 2020 broadcast — which was the lowest rated in Oscars history, drawing around 10 million viewers — featured far-left celebrities lecturing Americans on issues of race and social justice. Actress-director Regina King kicked off the show by talking about George Floyd and celebrating the guilty verdict in the Derek Chauvin trial.

Regina King: “I know that a lot of you people at home want to reach for your remote when you feel like Hollywood is preaching to you—but as a mother of a Black son, I know the fear that so many live with, and no amount of fame or fortune changes that.” https://t.co/1nPGCH7lbu pic.twitter.com/3B8GrXZqtV

Schumer, Hall, and Sykes are all outspoken left-wing activists, who regularly use social media to promote Democratic politicians and woke culture.  Schumer, who is a cousin of Senate Majority Leader Chuck Schumer (D-NY), is the most politically active among the three co-hosts, having promoted Democrats’ efforts to federalize elections and rollback voter identification requirements.

Wanda Sykes has smeared Trump supporters as racists while also calling the then-president a “lying motherfucker.”

Regina Hall has teamed up with former first lady Michelle Obama’s When We All Vote initiative, which has aggressively pushed vote by mail and promoted so-called “voting rights” legislation, which would federalize elections and cancel voter identification requirements.

This year’s Oscars is dominated by Netflix’s period western The Power of the Dog, which has received 12 nominations, more than any other title.