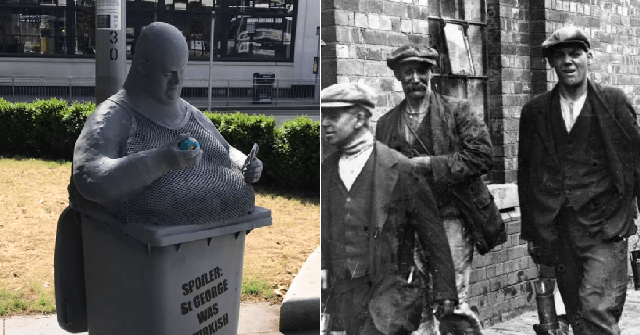 As discussion rages over what could replace the toppled statue in Bristol, an early contender has manifested in the city, as a figure appearing to depict a working-class male in a dustbin was left beside the now empty Colston plinth.

The piece appeared on Monday morning and was reported by local outlet Bristol 24/7 to be by an unknown artist. It seems to conform to the modernist school of art where work is not worthy unless it challenges or provokes the viewer or is outright unpleasant.

The work is apparently a homage to the neologism ‘Get in the bin’, popularly used on social media to describe people so awful that they should be taken away by government waste collectors and put in a hole in the ground. It shows an overweight man sitting in a council-issue dustbin. The object is chained to a lamp post and looks over the plinth of Edward Colston, the 17th century Bristol merchant today closely associated with the slave trade whose memorial was toppled and thrown into the harbour earlier this month.

The new character sporting a string vest and beer belly was spotted this morning: https://t.co/cLYf5GyR2d

Hammering home the point of who is being illustrated in the new work, the figure wears a string vest, a traditional warming layer now largely extinct. Despite the garment having pretty much now vanished, it lingers on in the minds of some as a symbol of the working class.

Underlining this, a snobbish article from the former newspaper the Independent, from 2007, had reported how it was vanishing from sale at several national stores. The article explained the disdain its middle-class left-wing readers held for wearers of the string vest, decrying them as “professional northerners and unreconstructed males… old men and pot-bellied plumbers.”

The figure holds a small globe and a mobile phone with a message reading: “English for the English.” On the wheelie bin itself, a message reads: “Spoiler: St George was Turkish.”

While a popular talking point for the left around the annual celebration of St George’s Day — England’s saint day — even this oft-attempted put-down is not correct. Neither did Turkey exist, nor did the Turcic people live in the region St George is believed to have originated from at that time, the Turcic people having migrated to the area later.

The Christian saint and his legend is a popular one across Europe, largely due to its associations with the crusades, and he is the patron saint of several nations and cities. Traditionally, St George was venerated in England for his martial prowess, rather than for being English, unlike St Edmund the Martyr, who was considered the patron Saint of England before the Norman invasion.