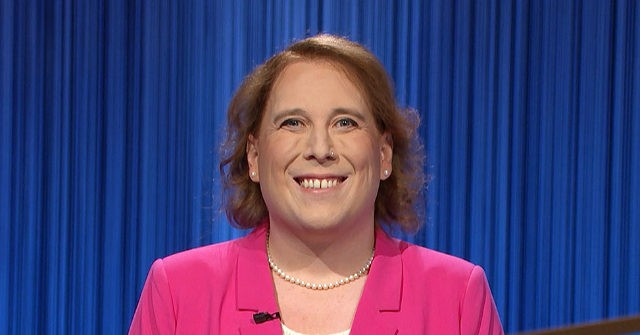 Transgender Jeopardy! contestant Amy Schneider has reportedly signed with Hollywood mega-agency CAA, a move that is sure to boost Schneider’s visibility and nascent celebrity status following a 40-game winning streak that came to an end this week.

One of Hollywood’s most powerful talent agencies, CAA represents many of the industry’s biggest stars as well as numerous Democratic politicians. But it has also come under fire following accusations by Rose McGowan and Courtney Love that the agency sent actresses to meet Harvey Weinstein while knowing about the mogul’s history of sexual assault and misconduct.

Amy Schneider’s signing with CAA — which was first reported by The Hollywood Reporter — doesn’t necessarily mean the transgender engineering manager will become a movie or TV star. The agency could represent Schneider for book deals and product endorsements, as well as speaking engagements.

Schneider ranks as No. 2 on Jeopardy!’s all-time consecutive wins, behind only all-time champion Ken Jennings. Schenider’s earnings on the show amount to $1.4 million.

The mainstream media’s coverage of Schneider’s Jeopardy! streak frequently described the contestant as a “woman” without referring to the fact that Schneider is a transgender who was born a man and now identifies as a woman.

The Hollywood Reporter article called Schneider “the most successful woman ever to compete on Jeopardy!”