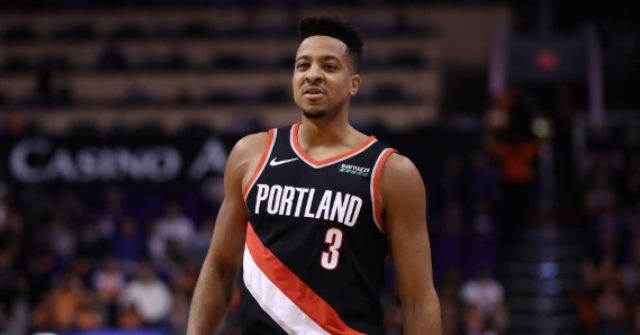 Portland Trail Blazers guard C.J. McCollum is angered over President Donald Trump’s plans to hold a rally in Tulsa, Oklahoma, on June 19th. That date, June 19th, is known as also known as”Juneteenth.” A day which commemorates the emancipation of slaves in Texas in 1865. June 19th is also the day, in 1921, in which the City of Tulsa saw one of the worst race riots in American history.

McCollum re-tweeted a message from CBS Newsman Dan Rather, who was outraged that the president has chosen both Tulsa and June 19 for his rally. “Sick move by a sick man,” the NBA player added.

Rather and McCollum were incensed that Trump picked Tulsa because almost 100 years ago, a massacre of around 500 blacks occurred there. The massive attack on Tulsa’s black citizens happened between May 31 and June 1 in 1921.

Despite the attacks, the Trump campaign defended the president’s record on black issues.

“As the party of Lincoln, Republicans are proud of the history of Juneteenth, which is the anniversary of the last reading of the Emancipation Proclamation. President Trump has built a record of success for Black Americans, including unprecedented low unemployment prior to the global pandemic, all-time high funding for Historically Black Colleges and Universities, and criminal justice reform. Joe Biden spent last Juneteenth raising money at a private fundraiser and defending comments he made celebrating his work with segregationist senators,” Katrina Pierson, a senior adviser to the Trump campaign, told Fox News.