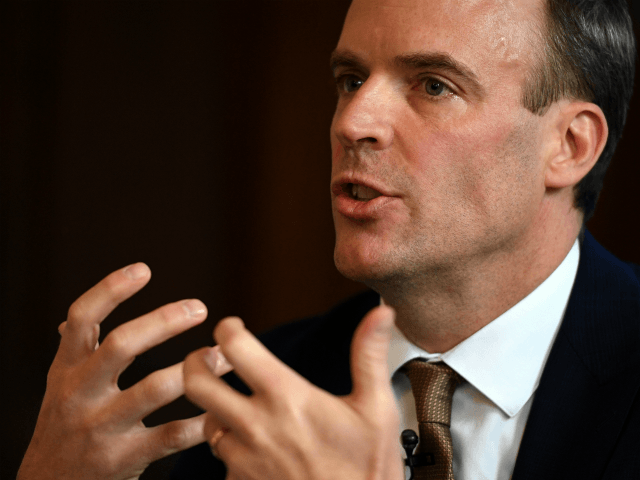 Tory leadership contender Dominic Raab has asserted his position as the one true believer in Brexit in the running to become the next British Prime Minister, taking a swipe at lead rival Boris Johnson’s perceived lack of conviction.

Officially launching his candidacy Monday, Mr Raab said in a wide-ranging speech that he was “the conviction Brexiteer with a plan” and reassured Conservatives that “I’m the Brexiteer you can rely on”.

He went on to say that “we’re up against it and we won’t deliver Brexit with bluff and bluster.”

The comments were seen as a dig at Boris Johnson, who is currently the favourite to take over from outgoing Prime Minister Theresa May but whose dedication to Brexit has been questioned. Despite being a key figure in the campaign to leave the EU, Mr Johnson voted for Theresa May’s much-disliked withdrawal bill which many have said is even worse than remaining in the EU.

Boris Johnson courted negative headlines in 2016 when it transpired before coming out in favour of Brexit during the referendum campaign he’d written two versions of one article — one for leave and one for remain — before declaring for the out campaign. He subsequently claimed the second article was to aid his thought process.

Brexit Party leader Nigel Farage — the man that any future Conservative leader has to beat — has recently said that he had some “really quite serious concerns” about Mr Johnson and his ability to deliver on Brexit.

In recent days, Mr Johnson has said his proposal for Brexit is that the UK should leave by October 31st with or without a deal but that the UK should withhold the so-called ‘Brexit bill’ of £39 billion in order to try and negotiate better terms. Earlier today key Europhiles President Emmanuel Macron and Senior MEP Guy Verhofstadt said that withholding the bill would be potentially illegal and that there would be ‘consequences’ if the UK did so.

In his speech, Mr Raab also took aim at Theresa May’s handling of the Brexit process, saying that Britain had been “humiliated”. He said of his campaign “We have suffered a loss of nerve. We need new leadership. That leadership needs to be bold.”

Mr Raab also took another dig at Boris Johnson who earlier had said he planned to cut a higher rate of tax for those earning above £50,000 a year. Mr Raab said of his own plans “My tax cuts are for the very poorest in work”.

As things stand Mr Johnson remains the favourite to succeed Theresa May, however with many candidates setting out their launches over the next few days, it remains to be seen who will make it into the next round. In terms of the number of MP endorsements, Mr Raab currently sits in fourth place behind Mr Johnson, Environment Minister Michael Gove and Foreign Secretary Jeremy Hunt.