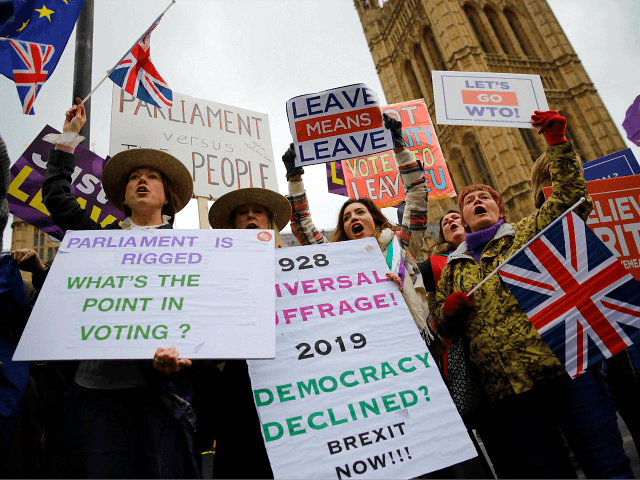 Conservative Party officials are reportedly drawing up plans to delay Brexit, secure support for an EU deal in April, and hold a snap election on June 6th.

The Remain-supporting Mail on Sunday newspaper reports that the party has begun “block-booking printing plants”, presumably for campaign materials, “and hiking its spending on digital advertising.”

Prime Minister Theresa May had promised backbench MPs she would not lead the party into its next election battle, but has reneged on such guarantees before — for example, when she said she would not call a snap election in 2017, before doing so anyway and losing her parliamentary majority, despite winning  a significantly larger share of the vote than predecessor David Cameron.

Sunday papers: YO, AN ELECTION ON JUNE 6.
Britain: https://t.co/ZOo4gYTJug

The MoS claims “senior staff at Tory HQ have been briefed on plans to deal with deselection attempts by members of some MPs ahead of a General Election” — presumably a response to the growing movement to deselect Remain-supporting MPs in Leave-voting constituencies, who have upset locals by reneging on their manifesto pledges to deliver a Brexit ending Britain’s membership of the EU Customs Union and Single Market after they were elected.

EU loyalist Oliver Letwin, for example, stunned local party members by openly admitting that  “I wasn’t an architect” of the 2017 manifesto, which stated that “no deal is better than a bad deal”.

“I didn’t believe it then and I don’t believe it now,” he added, by way of justification for his attempts to take No Deal off the table — which would leave the EU with little incentive to offer anything other than a highly disadvantageous deal — leaving some to question whether he obtained constituents’ votes under false pretences by standing on it.

The MoS says one minister told them the snap election plan was merely a bid by “second-rate staff desperate to keep their jobs”, while an ally of Mrs May denounced it as “utter madness”.