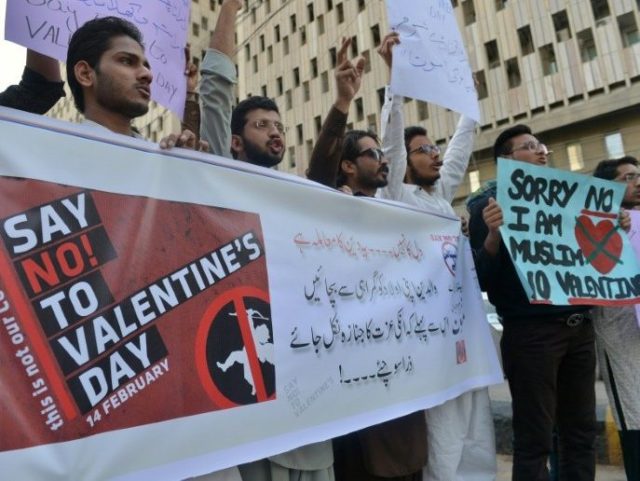 The Islamabad High Court (IHC) in Muslim-majority Pakistan on Tuesday sustained its decision to outlaw Valentine’s Day celebrations and the promotion of the February 14 Christian holiday across the country, ordering authorities to take action on revelers.

On Tuesday, the Associated Press of Pakistan (APP) reported:

The court ordered Islamabad chief commissioner to ensure implementation of court directives while taking actions against the people who celebrate this day. The order read that no arrangements could be made in any city of the country regarding Valentine’s Day.

The court also ordered Pakistan Electronic Media and Regulatory Authority to ensure implementation of the decision on TV channels.

It appears Pakistani film and TV stars have found a way around the ban — celebrating “love, laughter, and togetherness ahead of Valentine’s Day,” the Daily Times noted.

“Valentine’s Day is named after a Christian saint who, legend has it, was martyred in the name of love,” the Washington Post noted on February 13, 2017, the day the Pakistani court issued the ban.

Muslim-majority Pakistan’s controversial blasphemy law carries a punishment of life in prison or death for those who insult Islam.

For years, Valentine’s Day has drawn protests from a constellation of religious organizations claiming Valentine’s Day violates Islamic sensibilities and traditions. Pakistan is not alone. Each year, Iranian officials launch another crackdown on Valentine’s Day to try to blunt its growing popularity among the young. Cities across Indonesia also have sided with Islamic protests to take a stand against the celebration.

Reportedly, a petition by a “mysterious” private citizen Abdul Waheed Khan prompted the IHC to outlaw the holiday.

In his plea to the court, Khan argued that Valentine’s Day is “against Islamic teachings” and while purporting to promote love, it instead propagates “immorality, nudity, and indecency.”

The sitting Pakistani president in 2016, Mamnoon Hussain, joined the anti-Valentine’s Day movement in the predominantly Muslim country, arguing that the holiday “has no connection with our culture and it should be avoided,” the Post revealed.

In a rebuke of Pakistan’s regional foe India, Hussain alleged that Western traditions had “adversely affected one of our neighboring countries.”