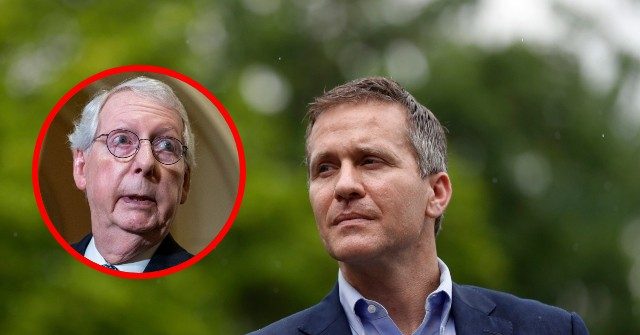 “These swamp creatures and grifters know their time at the trough is finished,” Johnson said. “That’s why they’re scared of America First champion Governor Greitens.”

Speaking with Breitbart News this past May, Greitens said that establishment Republicans fear that the base has drifted toward the “America First” movement.

What is happening is that the whole movement, the whole Republican Party is moving towards the America First movement,” Greitens said. “That’s where the people of Missouri are at. That’s where I’m at.”

Greitens further described himself as an “America first candidate running against RINOs who are supporting Mitch McConnell.”

A recent Real Clear Politics poll for the Missouri Republican primary Senate race showed that Greitens, who resigned from the governorship in 2018 over sexual assault allegations, has 24.8 percent of support from likely voters while  Missouri Attorney General Eric Schmitt trails with 21.3 percent.