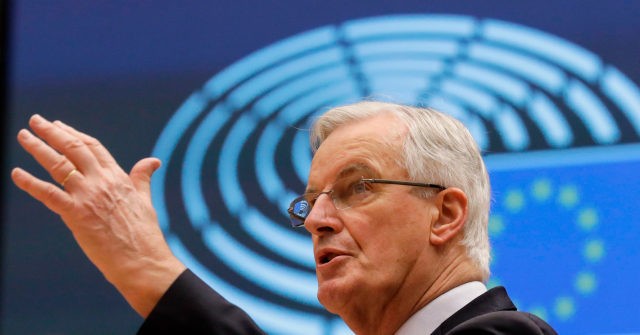 One of the European Union’s top bureaucrats has admitted that Brussels’ excessive bureaucratic demands held back the progress of the bloc’s vaccine programme, adding that Brexit Britain succeeded because it was willing to take a gamble by partnering with private industry.

The EU has been struggling for months to vaccinate the populations of its 27 member states, with reports from earlier in the year laying blame on the bloc’s insistence of taking over the procurement of vaccines from nation-states, which allegedly resulted in the European Commission, the EU’s executive arm, signing a contract with drugs firm AstraZeneca some three months after the British government had done.

Michel Barnier, the former Brexit negotiator for the bloc, admitted to radio station France Inter on Monday that “there were mistakes at the start”, in comments reported by Britain’s Sky News.

Mr Barnier continued: “Why? Because we wanted to decide for the [EU] 27, and not on our own. It’s easier to decide on our own rather than as 27 [countries], especially since we didn’t have that competence in Europe. This is one of the lessons to be learned.”

As if it were a revelation, the former French minister conceded that sometimes, national governments should be allowed to run their own affairs, saying: “Perhaps there are issues in Europe where it will be necessary to hand over the decision-making to the country or the region.”

He also said that part of the problem was the EU’s “almost ideological mistrust of public-private partnerships”, adding: “We don’t know how to take risks.

“The British took risks by financing the private sector. The Americans took risks. We don’t know how to do that yet.”

The admission comes months after European Commission President Ursula von der Leyen admitted that Brexit Britain was like a “speedboat” compared to the EU, as the bloc came under criticism from the British Europhile and continental press, with German media labelling the Brussels vaccine fiasco “the best advertisement for Brexit”.

Farage Tells Breitbart: After Europe’s Vaccine Failure, the British People Can See We Are Better Governing Ourselves https://t.co/uFXDn2Xeez

Speaking to Breitbart News Daily last week, Brexit leader Nigel Farage said that the UK’s vaccine success showed that country was better off outside of the bloc, governing itself.

Mr Farage said: “One of the arguments against Brexit was that we weren’t big enough, good enough, to make big decisions on trade, or even on health pandemics. The idea was that when it came to health pandemics, it would be the unelected European Commission [that would] deal with this.

“Having left the European Union, we appointed our own boss of vaccine distribution and do you know what? It’s been done brilliantly, it’s been done efficiently.”

The UK left the EU officially on January 31st, 2020, and did not leave its institutions until the end of the transition period on December 31st, 2020. Both parties agreed in principle on a trade deal on Christmas Eve, but lawmakers did not pass it in the European Parliament until last week.

Ahead of ratifying the document, Members of the European Parliament, elected from regions of the EU’s 27 member-states, declared Brexit a “historic mistake”.

Speaking on Brexit, Mr Barnier told France Inter, in comments reported by POLITICO, that it was a “lose-lose situation” akin to a “divorce”, admitting, however, that it was a “weakening … for us, who are amputated of this country”.