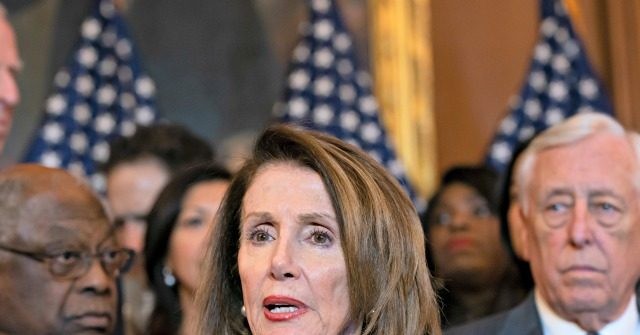 Democrat leaders in Congress this week repudiated the “defund the police” calls across the country that have grown increasingly loud among some of their colleagues, other leftists, and protesters in the wake of the death of George Floyd while in Minneapolis police custody.

Democrats have reportedly calculated that the “defund the police” efforts that have become a battle cry for Floyd protesters are a political poison pill.

Referring to the calls, the Hill reported on Tuesday:

The idea is splintering black activists and some prominent progressive lawmakers from Biden and top congressional Democrats while providing fodder for national Republicans, who are quickly mobilizing to use it as the latest example of Democrats moving to the left in the lead up to November.

There is considerable support on the left for defunding police, but other Democrats worry the issue would turn off swing voters and cost Biden and Democratic Senate candidates votes in key states and races.

“If this becomes a debate about defunding the police, we will lose, and there will be catastrophic consequences,” an unnamed Democratic strategist told the Hill. “It’s a political disaster. It’s such a surreal moment.”

Several Democrat lawmakers have distanced themselves from the politically toxic push to defund law enforcement.

House Speaker Pelosi has also steered clear of endorsing the efforts, claiming that local officials should make such decisions.

“The funding of police is a local matter, as you know. From the standpoint of our [police reform] legislation, we’re not going to that place,” Pelosi told MSNBC on Monday. “What we’re doing is talking about how we change policy to make our policing more just.”

Rep. Bass, the chairwoman of the Congressional Black Caucus, also came out against the move the defund the police.

“No, I don’t believe that we should defund police departments,” she told reporters on June 3.

“I think it can be used as a distraction and that’s my concern,” she added Monday, according to Politico. “I think the intent behind it is something that I support — the idea that communities need investments.”

During a private caucus call Monday, House Majority Whip Clyburn urged his colleagues to steer away from the defund the police calls, Politico added.

“This movement today, some people tried to hijack it,” he reportedly said on the call. “Don’t let yourselves be drawn into the debate about defunding police forces.”

Sen. Joe Manchin (D-WV) described the defunding of the police push as “crazy” and “stupid.”

“You can’t defund the police. That’s stupid. It’s crazy, and anyone who talks about that is nuts,” the Democrat senator said Monday, according to the Hill. “We just have to make sure our police have the proper education and the proper screening.”

On Sunday, Sen. Cory Booker (D-NJ) told NBC’s Meet the Press that he will not call for localities to defund law enforcement.

I don’t support defunding the police. I support conditioning federal aid to police based on whether or not they meet certain basic standards of decency, honorableness and, in fact, are able to demonstrate they can protect the community, everybody in the community.

Echoing the White House, Republican lawmakers from the House and Senate have lambasted the calls to defund the police.

“Democrats want to defund you, but Republicans will never turn our backs on you,” House Minority Leader Kevin McCarthy (R-CA) added as he thanked police officers on Monday via Twitter.

To the police officers across the country who put on the uniform every day and uphold their oath—THANK YOU.

Democrats want to defund you, but Republicans will never turn our backs on you.

In New York, more than 40 city council candidates are calling for a $1 billion cut to the NYPD’s $6 billion budget over four years to help fund other programs such as the city’s summer youth employment program. In cities such as Minneapolis, Dallas, Philadelphia, and Nashville, similar movements are gaining traction.

On June 3, Los Angeles Mayor Eric Garcetti announced that he would slash funding for the city’s police budget by tens of millions and reinvest the money in minority communities.

Leftist activists, reporters, and celebrities are also pushing the defund the police movement.