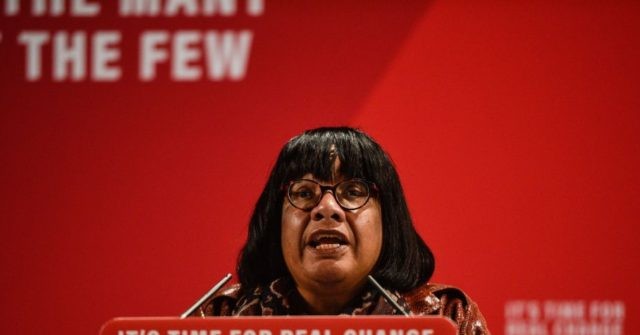 “We all have to hope and pray” that Donald Trump loses the election in November, Diane Abbott has said, blasting the leader as “the most racist U.S. president” in living memory.

The veteran Labour MP was speaking on Sunday to an online conference held by the far-left Stand Up To Racism (SUTR) group when she claimed to have “never known a U.S. president who so blatantly pandered to white nationalism in the way that Donald Trump does”.

“And we all have to hope and pray that he loses the forthcoming presidential election,” said Abbott, who last year declared it “unacceptable for the President of the United States to intervene in British politics” after Trump highlighted rising crime in the UK capital under Labour mayor Sadiq Khan.

It’s unacceptable for the President of the United Sates to intervene in British politics pic.twitter.com/v9wBTskMRU

“But we also have a racist British prime minister. I don’t think anyone doubts that, sadly, he is a racist,” she then warned of Johnson, adding: “And when you have people at the very top of the political pyramid who are racist, what you see and what we have seen is a rise in racism in state institutions.”

According to PA Media, which published a clip of the former Shadow Home Secretary addressing the SUTR online event, Abbott also used her speech to highlight “the plight of refugees” in Britain.

The gaffe-prone 67-year-old has long decried UK restrictions on migrant numbers as “racist”, asserting that attempts to control Britain’s borders should be replaced with efforts to reeducate the public on the alleged benefits of immigration.

As a figure who proudly puts black identity at the heart of her politics, Abbott has been criticised in the past for having an overly racialised view of the world, as happened following her response to a question on whether it was hypocritical of her to send her son to a fee-paying school while being a vocal opponent of private education.

“West Indian mums will go to the wall for their children,” she insisted, before refusing to answer BBC interviewer Andrew Neil when he asked if she wanted “to make it clear that, in the round, in general, West Indian mums are no better or no worse than white mums and Anglo-Asian mums and so on”.

While the Hackney MP is an outspoken campaigner against so-called racism, her privately educated son was in court earlier this year charged with a string of offences, many of them violent, including racially aggravated criminal damage.