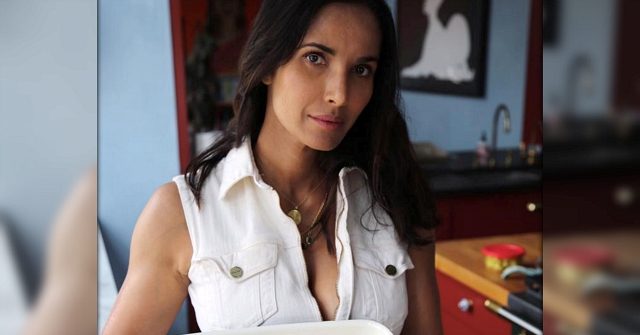 Top Chef host Padma Lakshmi shared a picture of an American flag pie on the Fourth of July, but it came with a loaded political message for President Trump, with “Close the camps” written with dough.

The self-described feminist tweeted the creation to her 580k Twitter followers, calling it a “truly American pie” and urging people to contact their representatives.

A truly American pie for the bbq today: pic.twitter.com/WeuuGNSteZ

Contact your representatives tomorrow and demand they #CloseTheCamps: https://t.co/pQ1GtzrbNM

The host’s creation inspired many other “resisters” across social media to make their own “close the camps” creations.

thanks for your inspiration today and everyday. looking forward to going to the BBQ now. pic.twitter.com/aBDaHMzuQv

This is not the first time Lakshmi has spoken out against migrant shelters, which the far left has likened to “concentration camps.”

“While you’re celebrating the 4th at a bbq, swimming in the pool & eating popsicles, these families are still here,” she said on Wednesday.

While you’re celebrating the 4th at a bbq, swimming in the pool & eating popsicles, these families are still here. #CloseTheCamps pic.twitter.com/UHgpuaTimy

“This is a humanitarian crisis on our soil. These asylum-seeking families are being held captive without access to a bed, a shower, toothbrush, for WEEKS,” Lakshmi said to her 571k Instagram followers the day prior.

“This is insane. Contact your representatives and tell them this is UNACCEPTABLE,” she continued, adding a series of hashtags, one of which called for the elimination of U.S. Immigration and Customs Enforcement (ICE).

Detention facilities are a far cry from both concentration camps and certainly from death camps. Detention facilities serve as a temporary holding place for illegal migrants – not U.S. citizens or civilians – while their claims and hearings are being processed. Additionally, detention centers provide another layer of security for the American people.

Still, freshman Rep. Alexandria Ocasio-Cortez (D-NY) has been leading the charge and inspiring celebrities to continue to tout the false comparison. The New York lawmaker visited migrant shelters in the El Paso area this week and announced that women were forced to drink out of toilets. That troubling claim was quickly debunked by both photos and a Customs and Border Protection agent who was present at the time of the lawmaker’s visit.

“So this is what happened with the migrant and drinking water from toilet: She wanted water, didn’t know how to use the faucet in the cell, and drank from the toilet,” the agent said, according to the Washington Examiner. “She never told AOC that we made her drink from the toilet. AOC, of course, changed it. This was when she [the migrant] was apprehended and brought into the facility.”

Despite those facts, other left-wing celebrities, such as actress Rosie O’Donnell, continue to toe the party line. On Independence Day, the former View host announced plans to “match the money made from the sale of her artwork and donate the funds to nonprofit organizations assisting illegal aliens,” Breitbart News reported.

ROSIEODONNELL2019 https://t.co/TI58I9s4sy via @Etsy – all money made will be matched by me and donated to non profits helping children in cages in trump camps. #NoKidsInCages https://t.co/bdjNlI348Z