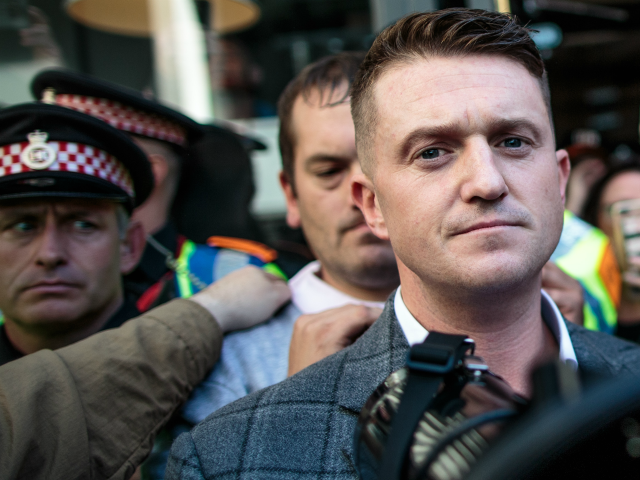 An ‘anti-fascist’ group which has received funding from billionaire open borders campaigner George Soros has complained that Tommy Robinson may earn up to £1 million from a U.S. speaking tour.

English Defence League founder turned anti-extremism campaigner and street organiser Robinson has been invited to the United States by Congressman Paul Gosar, who lobbied President Donald Trump to intervene on the independent journalist’s behalf when he was incarcerated for breaking reporting restrictions around a grooming gang trial in northern England.

Robinson has previously been denied entry to the United States due to his criminal record, and was even imprisoned for entering the U.S. on someone else’s passport, resulting in what is thought to be a 10-year ban from the country — but HOPE not Hate fear the Trump administration will waive this, given he has been invited by Gosar and six other Republican lawmakers, and that figures close to the President including Donald Trump Jr expressed support for the anti-grooming gangs campaigner.

Reason #1776 for the original #brexit. Don’t let America follow in those footsteps. https://t.co/6QLejT61i4

“This is an administration infected with anti-Muslim prejudice and is therefore likely to look more favourably on [Tommy Robinson’s] request to overturn his ban,” complained HOPE Not Hate CEO Nick Lowles on the Antifa group’s website.

“[Tommy Robinson] is increasingly confident of getting into the U.S. next month. We all need to do what we can to prevent that from happening,” Lowles continues, urging supporters to sign a petition to Trump’s ambassador to make sure he remains barred — although how open to persuasion he will be given Lowles’ decision to directly attack the administration beforehand is an open question.

Lowles suggests that lobbying the British government to ask the U.S. not to grant Robinson a visa “might be our best way of preventing [him from] pushing his anti-Muslim agenda to a global audience”, but the current administration does not seem to share the British state’s view of its troublesome subject.