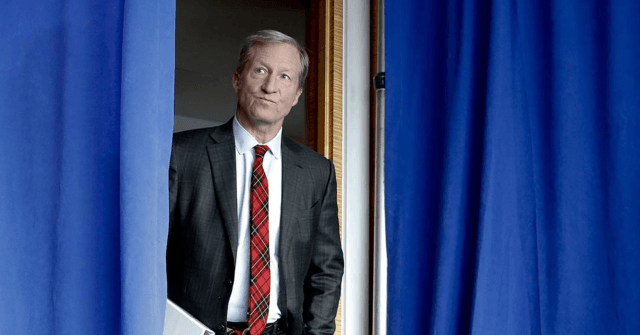 Left-wing billionaire and activist Tom Steyer said Monday that President Donald Trump could still be impeached even if special counsel Robert Mueller found no evidence that Trump’s 2016 presidential campaign coordinated or colluded with the Russian government.

Steyer told David Catanese of U.S. News & World Report that Trump could still be impeached for “election fraud” for “lying to Congress through Michael Cohen”:

. @TomSteyer tells me he still sees grounds for impeachment, even without Russian collusion:

The billionaire and founder of the “Need to Impeach” movement against Trump confirmed in a Monday afternoon tweet that Trump “committed eight additional impeachable offenses” unrelated to Mueller’s report:

Because impeachment shouldn’t hinge on the contents of Mueller’s report. Mr. Trump has committed eight additional impeachable offenses on which it has no bearing.

We deserve to see what we paid for, and @realdonaldtrump has still overwhelmingly met the criteria for impeachment. https://t.co/mSEecxRtux

Steyer outlined those eight additional offenses on the “Need to Impeach” website, claiming that Trump committed impeachable offenses such as “undermining the freedom of the press” and “cruelly and unconstitutionally imprisoning children and their families” that were not listed in the Mueller report.

The left-wing billionaire previously called for Attorney General Bill Barr to release the full contents of the Mueller report, telling his supporters Friday that Trump “participated in crimes” while serving as president.

Steyer is not the only left-wing activist claiming Trump lied to Congress through Cohen.

Trump might not have colluded with Russia, but we know that he colluded with Michael Cohen to violate the law and commit crimes. The evidence is overwhelming. And for THIS, he should be indicted. I have been consistent on this point for a year.

Federal prosecutors charged Avenatti with extortion on Monday for allegedly threatening to damage Nike’s reputation unless the company paid him more than $20 million.