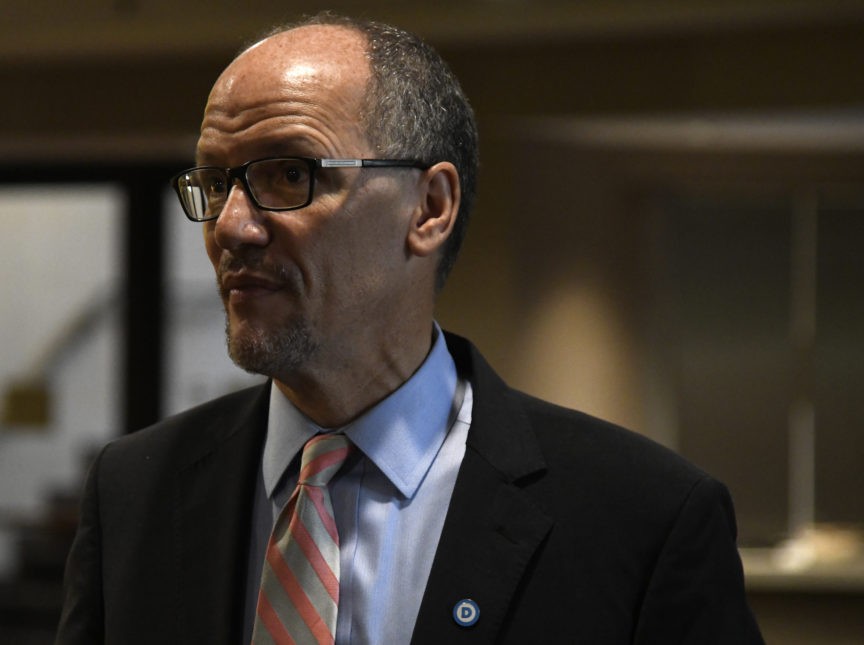 Perez also accused Republicans of “going after Medicare and Medicaid”:

We all believe that health care is a right for all and not a privilege for a few. We can debate how to get from 90 percent to 100 percent coverage, and I welcome that debate, but what we have to understand is that the Republicans want to take us from 90 percent down to 50 percent or 60 percent by going after Medicare and Medicaid and the Affordable Care Act.

Washington, D.C., and Puerto Rico should be granted statehood to increase Democrat representation in Congress, said Perez: “I’ve supported statehood for both Puerto Rico and for the District of Columbia, and I hope that those things happen.”

D.C. was ranked the second-most “liberal” city in America by Forbes, with San Francisco, CA, taking the top spot. Both houses of Puerto Rico’s legislature are held by New Progressive Party (PNP) majorities.

Perez expressed support for Sen. Joe Manchin (D-WV), despite the West Virginia senator’s vote in favor of confirming Justice Brett Kavanaugh to the Supreme Court. He described Manchin as a critical component of the Democrats’ pursuit of government-run health care:

I wish he had voted differently. But the most important issue confronting Americans right now, in this midterm election, is access to health care. If Republicans win, they’re going after Medicare, Medicaid, Social Security. So I want more Democrats in the Senate to fight against those efforts, and I know Joe Manchin will be one of those people, because I’ve met him.

Democrats are “fighting for people with pre-existing conditions to get access to health care [and] fighting to save Medicare and Medicaid,” said Perez.

Perez repeatedly listed “climate change” as a Democrat political priority. “Climate change is very real [and] something that we have to address as a nation.” Aside from calling for a “clean-energy economy,” he did not explain how Democrats plan to control the climate.

Asked about “reproductive rights,” Perez declared the Democrat Party’s platform as “very clearly and unequivocally pro-choice.” No limitations on abortion related to tenure of pregnancy were given.

Perez refused to label President Donald Trump a “racist,” despite being promoted to do so several times. Instead, he repeatedly accused the president of deploying “dog-whistle politics.” On Sunday, he said Trump’s “closing argument” leading up to Tuesday’s elections “appeals to racists.”

Perez’s refusal to specifically deride Trump as a “racist” could prove to be inadequate for the far-left “Resistance,” at least according to the HuffPost reporter, who asked: “If a progressive man of color who’s running the party can’t call that “racism” in the heat of an election, what kind of opposition party is this?”

On Democrats moving further left, Perez called for balancing “idealism” with “pragmatism.”
“Principled compromise is not a dirty word,” he said.

In July, Perez described Alexandria Ocasio-Cortez — a member of the Democratic Socialists of America — as “the future of our party.”

The HuffPost reporter suggest the ideologically “agnostic” Perez is inclined towards “ameliorist tendencies.” By contrast, it characterizes Rep. Keith Ellison (D-MN) — the DNC’s deputy chair — as a “stalwart progressive,” as if a chasm exists between the two DNC leaders, or could eventually open up.

Perez predicted Democrat victory following Tuesday’s elections: “We’re making great progress as an opposition party, and we’re going to be a majority party after this midterm.”