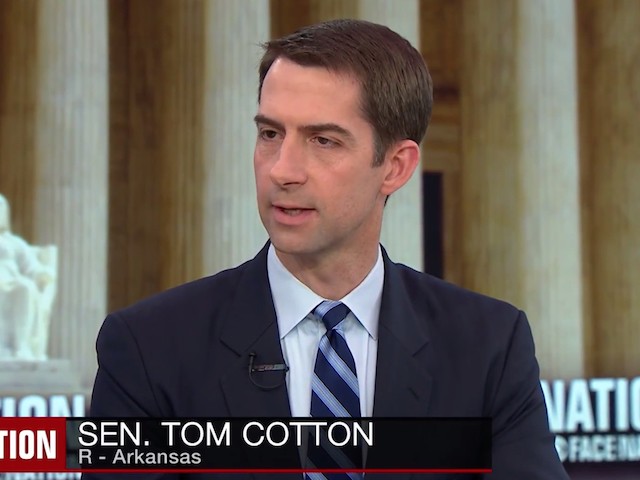 JOHN DICKERSON: We are joined now by Arkansas Republican Senator Tom Cotton. Welcome Senator. After watching the hearings- you were a supporter of Brett Kavanaugh’s, how did you process the new information that came out in the hearings?

SENATOR TOM COTTON: Well John, first off, let’s understand what we had to have this hearing. Miss Ford made these allegations in a confidential letter to Dianne Feinstein in July, shortly after Brett Kavanaugh was nominated. The very night he was nominated, Chuck Schumer, the Democratic leader, said that he would do everything in his power to stop the nomination. And that’s what happened. For three months, the Democrats have turned the advise and consent process into a search and destroy mission. These allegations are completely unsupported by any evidence. What evidence there is to a 36 year old claim, all support Judge Kavanaugh’s denial. But the- the Democrats have disgraced this process and the United States Senate in the orchestrated smear campaign of character assassination they’ve run against Judge Kavanaugh.

DICKERSON: Their argument of course, was that Dr. Ford asked to have this held in confidentiality and that they tried to do that. And that’s what it was–

COTTON: So- so let me

DICKERSON: But I- I actually–

COTTON:  No no no no no. No, John let me talk to you about that. Let me talk to your listeners about- or your viewers about that. There is a well established process of confidentiality on the committee. Dianne Feinstein could have showed that letter to Chuck Grassley and the two of them, as the leaders of that committee could have shared it with the FBI who could have discreetly conducted this inquiry in July and in August without betraying Miss Ford’s confidences. And they have betrayed her. They pointed her to lawyers who lied to her and did not tell her that the committee staff was willing to go to California to interview her. All that- now all of that is water under the bridge. Those lawyers are going to face a D.C. bar investigation into their misconduct. Dianne Feinstein and her staff is going to face an investigation for why they leaked that. All of this could have been done discreetly it happens hundreds of tim- hundreds of times every year in the Judiciary Committee.

COTTON: No, John it does–

COTTON: –it’s designed for issues that are sensitive John.

DICKERSON: you’re not going to get a chance to talk about Miss Ford’s testimony and Mr. Kavanagh’s testimony. You watched it I assume, what was your- what was your take away from that?

COTTON: Judge Kavanaugh hundred percent denied these allegations. There is not a single bit of corroborating evidence. Every evidence that we do have to include the people that Miss Ford herself named either don’t recall this incident or they deny that it happened.

COTTON: Miss Ford was sympathetic and she was sincere. She has been victimized by the Democrats in this process, John. They betrayed her own requests for confidentiality. They leaked this to the media at the last minute because they are on a search and destroy mission for Brett Kavanaugh.

DICKERSON: You said when we last talked in November, “I think it’s important that women feel they can come forward. That’s a good change in the norms and the expectations of our society.” A woman came forward here. And you’re saying basically she said nothing credible. How can women come forward, if when they do they’re- they’re told they’re not credible?

COTTON: She came forward confidentially to Dianne Feinstein. Dianne Feinstein did not share that with the proper authorities. Chuck Grassley, her counterpart, with whom she served for decades in the Senate–

DICKERSON: –I understand that–

COTTON: –and the FBI that could have reviewed these matter confidential- confidentially. Then they leaked it to the media–

DICKERSON: So that a woman thing about coming forward will have it immediately turned into a partisan issue, as you’ve done it, her- her issues are not being discussed by you. You haven’t discussed them since you’ve been here. Why would a- would a person want to come forward if immediately the response is to get ground up in this partisan thing? You’re blaming it on the Democrats, fine. But she’s still a human being who has come forward. How should she be–

DICKERSON: –How do you process what she said?

COTTON: John, any impact that this entire episode has had on women’s willingness to come forward and report sexual assault, which I encourage them all to do immediately after it happens, is caused by the Democrats, is caused by Dianne Feinstein and Chuck Schumer not respecting her requests for confidentiality. Now, when you come forward with an accusation as serious as this it has to be tested against the evidence and against proof and we would have known that confidentially inside the Judiciary Committee in August–

DICKERSON: –is the FBI wasting its time investigating?

DICKERSON: –Mr. Judge. He sent them a letter. That wasn’t an interview.

DICKERSON: –So you’re not right about that.

COTTON: So they’ve either interviewed them or they’ve received letters–

COTTON: –letters under penalty of perjury. I- I–

DICKERSON: –Well, but that’s different. Now, these are actual interviews.

COTTON: So I’d be surprised if any of these people under penalty of perjury change their statements that they’ve already given to judiciary committee.

DICKERSON: Well, surprise, but that’s why we have investigations. Wrestle stuff to the ground, have a neutral fact pattern. Clearly the members of the Committee on the Republican side want Kavanaugh to be confirmed. So why should people who want him to be confirmed be in charge of an investigation? Why not have neutral observers wrestle the facts to the ground, which is what’s happening now? So it’s not a waste of time.

COTTON: John. We already know what everyone who is alleged to be at the party has said. They’ve submitted statements or been interviewed under penalty of perjury. I would be shocked if any of them change their statement under penalty of perjury to the FBI. But if this makes a few senators more comfortable about going forward and voting on Judge Kavanaugh’s very highly qualified nomination in-in the face of an orchestrated Democratic smear campaign, then–

DICKERSON: Was Judge Kavanaugh truthful in everything he said in his testimony?

DICKERSON: — What if it turns out he-he wasn’t —

COTTON: I found him to be appropriately indignant–

COTTON: -At the smear campaign. And I-I’m disappointed in what Chris Coons said on that video leading in. It reminds me of the old proverb, “This animal is very wicked. It defends itself when attacked–”

COTTON: If they didn’t want him to come in-come in and be angry and indignant at their false accusations, they should have thought about that before they accused him of being a serial sex criminal for the last two weeks–

DICKERSON: Let me ask you this. If it turns out that he was not truthful about something that has nothing to do with what allegedly happened thirty six years ago, truthfulness is still something you want in a Supreme Court nominee though, is that relevant?

COTTON: What-what are you talking about John?

DICKERSON: But if it turns out in the course of the FBI investigation–

DICKERSON: If his-if his assertions—

COTTON: — So are you siding with the Democrats and now want to have an open ended fishing expedition?

COTTON: — What are you talking about? —

DICKERSON: I’m asking you if in the investigation it turns out that something outside of that is- if his testimony turns out to not be–

COTTON: Well look, as John Kennedy and Lindsey Graham said, if there’s some shocking new bit of, not accusation, but evidence and proof, then of course I’m open to evaluating that evidence but I said I strongly suspect that every statement that was made to the Judiciary Committee under penalty of perjury is the exact same statement that’s going to be made to the FBI.