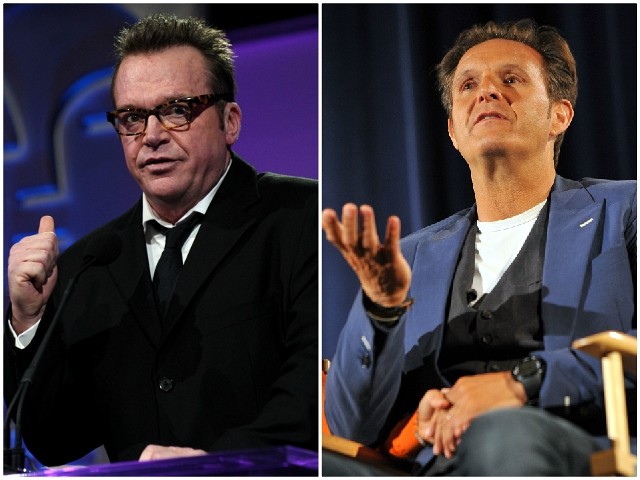 LOS ANGELES (AP) — A scuffle between Tom Arnold and a producer of “The Apprentice” has led to an exchange on social media.

Arnold tweeted that producer Mark Burnett choked him at a pre-Emmys party Sunday in Los Angeles. Burnett’s wife, actress Roma Downey, tweeted that Arnold “tried to ambush” the couple, and she posted a photo of what she says is her bruised hand.

Mark Burnett just went apeshit & choked me at this huge Emmy party then he ran away with his torn Pink shirt & missing gold chain. I’m waiting for LAPD

Bullshit. You lie your crazy husband attacked me you psycho. I’m filing police report & suing you for defamation. https://t.co/9yXAEXM6na

Actress Alyson Hannigan tweeted that she witnessed the confrontation and thought it was a joke until security jumped in.

Walked n2 party behind Tom Arnold and saw him & Mark Burnett get into a fight!Thought it was a joke until security jumped in! #WhyIstayhome

Police did not return a phone call early Monday. Emails to the celebrities’ representatives were not immediately returned.

Arnold’s new show, “The Hunt for the Trump Tapes,” is set to debut Tuesday. The show follows Arnold’s attempts to find tapes that show Donald Trump expressing bigoted views on the set of “The Apprentice,” which Burnett produces.