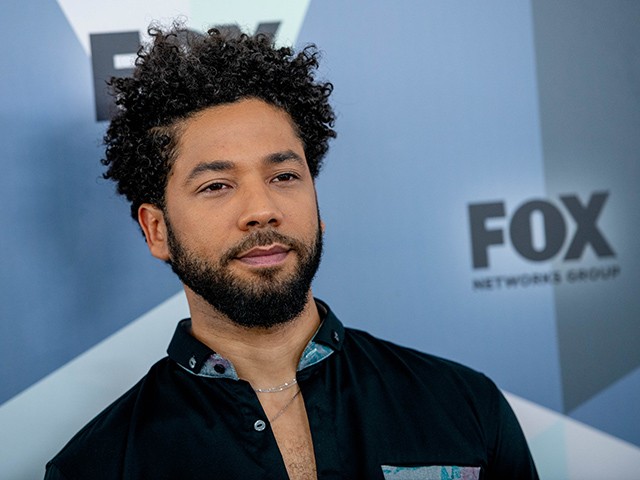 A neighbor of Empire actor Jussie Smollett claims she spotted a man resembling a “redneck” hanging out near the entrance to their Chicago apartment complex an hour and a half before the alleged attack, according to TMZ.

The woman, who asked to remain anonymous, said she saw the man pacing between the building’s entrance and parking garage while she walked her dog at around 12:30 a.m. Tuesday. According to Smollett’s neighbor, the man appeared agitated and “out of place” as he puffed on a cigarette. She said he was a white male with “scruff on his face” wearing a blue winter hat, a blue hoodie, and jeans. The alleged assailant also wore “thick, grey hunting socks,” which the neighbor said she could see because his jeans were ill-fitted, along with “camel-colored” shoes.

She says she noticed what looked like a rope, or a clothesline, protruding from the bottom of his sweatshirt, made of white and blue material.

She says he was staring at another man about 300 feet away, who was standing near another entrance to the building.

She says she got “creeped out” by the man, and after 5 minutes she retreated back into the building.

Photos of people of interest who were in area of the alleged assault & battery of Empire cast member. While video does not capture an encounter, detectives are taking this development seriously & wish to question individuals as more cameras are being reviewed pic.twitter.com/xJDDygtocr

Smollett, who plays the gay character Jamal Lyon on the popular Fox television program, alleges two men beat him while shouting racist and homophobic slurs and covered him in an “unknown chemical substance.” The actor claims that the attackers asked him, “Aren’t you that faggot ‘Empire’ n***r?” and placed a rope around his neck before leaving the scene. Smollett’s manager Brandon Moore claims to have been on the phone with the actor during the alleged attack and “clearly” heard the assailants shout “This is MAGA country.”

However, Smollett’s call logs have not been verified as the actor refused to turn over his cell phone to law enforcement for review, ABC 7 reporter Rob Elgas said Wednesday evening.

After the incident, the actor said he phoned his manager at his apartment, who then notified police of the alleged attack roughly 40 minutes later. Upon arrival, the officer found Smollett had several cuts on his face and was still wearing around his neck.

Police said detectives, who are looking into the alleged incident as a possible hate crime, have reviewed “hundreds of hours” of video from cameras around the area. “We haven’t seen anybody, at this point, matching the description he gave. Nobody looks menacing, and we didn’t find a container anywhere,” Guglielmi said.