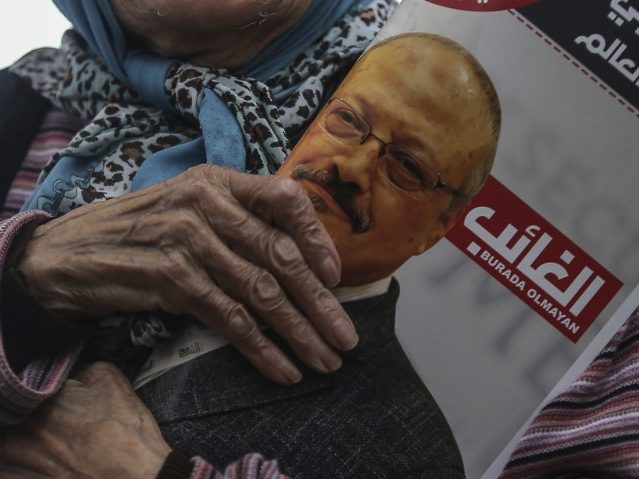 Time magazine unveiled the world’s persecuted journalists, with special honors going to slain Saudi writer Jamal Khashoggi, as its persons of the year for 2018. Escaping its analysis of imprisoned members of the press is the name of the world’s worst jailer of journalists: Recep Tayyip Erdogan, the president of Turkey.

Erdogan’s absence from Time’s lengthy analysis of the global state of freedom of the press this year – which argues extensively that American journalists struggle with persecution – is even more notable in light of the key role that Erdogan and his intelligence agents played in ensuring that Khashoggi’s disappearance and murder be the subject of some of the sloppiest and least reliable journalism in modern history.

Khashoggi, killed in the Saudi consulate in Istanbul by Saudi government officials while attempting to acquire marriage paperwork, features as the face of Time’s “The Guardians” – the journalists the magazine deems to be enduring persecution and persevering in their work. Many of those mentioned have suffered tremendously for their vocation, like Reuters journalists Kyaw Soe Oo and Wa Lone, currently serving a seven-year sentence for performing journalism in Myanmar. Others, notably CNN’s Jim Acosta, earn mention in the feature despite working without impediment and enjoying lofty positions at some of the world’s most elite corporations.

Time identifies “the question Khashoggi was killed over” as “Whom do you trust to tell the story?” The magazine does not mention the man American media trusted the most – Erdogan himself – or the confusion in the immediate aftermath of Khashoggi’s disappearance prompted by outrageously gruesome details “Turkish sources” fed to American media outlets about Khashoggi’s last days.

Erdogan’s intelligence agents told mainstream reporters, who breathlessly relayed these claims, that Saudi butchers had hacked Khashoggi into pieces alive, or dissolved him in acid, or recorded his death on an Apple Watch he happened to be wearing. Erdogan himself fed the speculation, claiming the Saudis had “painted over” evidence and all but stopping short of accusing Saudi Crown Prince Mohammed bin Salman of killing Khashoggi himself.

Time gives column space to exactly one persecuted Turkish journalist: Can Dündar, the former editor-in-chief of Cumhuriyet, Turkey’s last remaining major opposition publication.
“We all learned in our schools that journalists shouldn’t be the story ourselves, but this is, again, not our choice,” Dündar is quoted as saying. “This is the world of the strong leaders who hate the free press and truth.”

The magazine offered only the most cursory overview of Dündar’s story: “after being charged with revealing state secrets and nearly assassinated as a newspaper editor in Turkey, fled to Germany, where he set up a news site,” relegating a slightly longer biography to a caption on an image of the journalist.

Missing in Dündar’s story is Erdogan’s pivotal role in ensuring that the journalist would have to choose between prison and exile for having the nerve to approve the publication of an article exposing Erdogan’s meddling in the Syrian civil war. The larger story of Cumhuriyet, the nation’s oldest continuously publishing daily newspaper, also exposes true silencing of the press through violence and intimidation – allegedly the topic of the Time article.

Turkish police arrested Dündar and Cumhuriyet‘s Ankara bureau chief Erdem Gül in November 2015 for the publication of an article revealing evidence that Turkish intelligence services were shipping weapons into Syria to rebels fighting dictator Bashar al-Assad. The world of Syrian rebels, particularly prior to Assad’s victories in Aleppo and Idlib, is a notoriously disorganized one, featuring a variety of forces opposing Assad, at the time including jihadist outfits like the Islamic State and al-Qaeda offshoot the Nusra Front. Cumhuriyet did not specify whether the rebels receiving Turkish weapons were jihadists, but the damage was done, aided by reports also suggesting that Turkey was offering Islamic State recruits free passage into Syria and even battlefield healthcare.

Both journalists faced multiple life sentences for publishing the report, prompting outrage from international human rights groups. The latter resulted in Turkish judges deciding that the men should not spend more time in prison without a conviction four months later, but should still stand trial. Another three months later, leaving the courthouse for a temporary recess during proceedings, Dündar almost lost his life.

A man identified as Murat Şahin ran up to Dündar, shooting a gun and shouting “traitor!” As Dündar was offering a press statement at the time, the incident was caught on video. Şahin later told police he was trying to “teach Dündar a lesson” about speaking ill of Erdogan and did not intend to kill him.

On the day that Jamal Khashoggi disappeared – October 2, 2018 – the Turkish court system acquitted Şahin despite the video evidence of his attack. By then, Dündar had fled to Germany.

Dündar’s story has not ended. Last week, the Istanbul Chief Prosecutor’s Office issued another arrest warrant for Dündar independent of the ongoing investigation into the Cumhuriyet Syria report. The journalist stands accused of participating in the organization of violent protests in 2013 linked to Erdogan’s rival, the Islamic cleric Fethullah Gülen.

Nor did persecution end for Cumhuriyet with Dündar’s departure. The newspaper did not stop reporting unfavorable news about Erdogan’s government. Its staff did not stop publicly disparaging him (“insulting the president” is a crime in Turkey). In perhaps the pettiest journalism arrest in modern history, Turkish authorities arrested the cafeteria cook at Cumhuriyet‘s office, Şenol Buran, for stating that he would not serve Erdogan a cup of tea.

“Democracy is empowered by the people. There is democracy if there are people. Democracy is not possible with the media,” Erdogan notably remarked in October, after years of sitting atop the throne of the world’s most prolific jailer of journalists.

Estimates vary, but experts believe that Erdogan has shut down over 180 media outlets since the failed coup against him in 2016. Last week, the opposition website Turkey Purge estimated that over 300 journalists “have ended up in pre-trial detention as part of President Recep Tayyip Erdogan’s dragnet against his critics, while thousands of others were left unemployed after their newspapers and TVs were shuttered.”

Turkey’s censorship of the press is extraordinary, even in a world where the political values of rogue states like China appear on the ascendant. It is no secret, nor does Erdogan appear to intend it to be. That Erdogan escaped personal criticism from Time raises questions on the true objective of this year’s recognition and Time‘s own biases regarding press freedom.