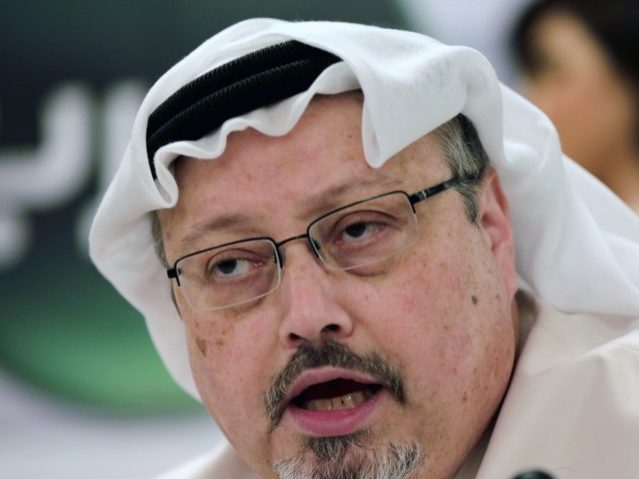 Time announced its “Person of the Year” award on Tuesday, presenting it to a clumsily-named entity called “The Guardians and the War on Truth.”

The Person of the Year covers present four exemplars: Maria Ressa of the Philippine website Rappler, the two Reuters reporters imprisoned in Myanmar, the staff of the Capital newspaper in Maryland, and most controversially Jamal Khashoggi, the Washington Post contributor murdered by Saudi agents at the Saudi Arabian consulate in Istanbul, Turkey.

The Time article conceded there was “no shortage of other examples” of persecuted journalists in 2018 and named a few of them:

Bangladeshi photographer Shahidul Alam was jailed for more than 100 days for making “false” and “provocative” statements after criticizing Prime Minister Sheikh Hasina in an interview about mass protests in Dhaka. In Sudan, freelance journalist Amal Habani was arrested while covering economic protests, detained for 34 days and beaten with electric rods. In Brazil, reporter Patricia Campos Mello was targeted with threats after reporting that supporters of President-elect Jair Bolsonaro had funded a campaign to spread false news stories on WhatsApp. And Victor Mallet, Asia news editor for the Financial Times, was forced out of Hong Kong after inviting an activist to speak at a press club event against the wishes of the Chinese government.

Media bias is often expressed through sins of omission, and the omissions in the Time article are astounding. For example, the above reference to Victor Mallet is the one and only time China is mentioned in the article, and it is a very mild rebuke to China’s immense censorship apparatus. Xi Jinping, one of the most aggressive oppressors of free speech and honest journalism in human history, is not called out by name.

Russian President Vladimir Putin’s nearly absolute control of his country’s media is mentioned only in passing, and even then only because Time wanted to rail against Russian troll farms for a bit, a nod to the Left’s conviction that Russian bots stole the 2016 election from Hillary Clinton.

Jamal Khashoggi was not even a “journalist” in his latter days, but an op-ed contributor to the Washington Post. He did some shoe-leather field reporting in his youth, but since it involved driving around Afghanistan with Osama bin Laden, his hagiographers prefer not to discuss that phase of his career at length. Nor do they enjoy discussing that he was a member of the Muslim Brotherhood and supported Islamism, an ideology with very little room for press freedom.

Maria Ressa of Rappler is the only other individual to get a Person of the Year 2018 cover to herself, and she is arguably not the best example of authoritarian Philippine President Rodrigo Duterte’s appalling crackdown on opposition journalism since Rappler is still publishing (despite Duterte’s best efforts) and she is still alive. The Philippines is one of the worst countries in the world for the targeted killing of journalists.

Time gave the game away by dwelling at length on how Duterte denounced Rappler as “fake news” and banned its reporters from his events. Khashoggi’s murder by Saudi agents has been used to attack U.S. policy in the Middle East and castigate President Donald Trump for supporting Saudi Crown Prince Mohammed bin Salman. Turkish President Recep Tayyip Erdogan has assailed the Saudis with particular vigor, yet Erdogan, the world’s worst jailer of journalists, somehow went unmentioned in a major year-end roundup of media suppression and manipulation.

But Time had plenty of room to rail against Donald Trump, named more often than anyone else in the “Guardians and the War on Truth” article, denounced in paragraph after paragraph as though he – not Xi Jinping, Vladimir Putin, Recep Tayyip Erdogan, or various other authoritarians noted for persecuting, jailing, and murdering journalists they disapprove of – was the great planetary threat to press freedom and the quest for truth.

The proverbial visitor from outer space reading Time’s Person of the Year tribute would assume America’s jails and graveyards are filled with silenced journalists, not those of China, Russia, and Turkey. He would assume the U.S. government is creating more disinformation than the Chinese Communist Party. He might think Iran is a free speech utopia since it is not mentioned by Time at all, even though Iran’s tyrannical government loves to imprison journalists with opaque trials and vague charges. Sadly those oppressed souls did not get a “Guardian of Truth” shout-out because Time was too busy raking Iran’s archenemy Saudi Arabia over the coals for Jamal Khashoggi’s murder.

In that way, Time’s Person of the Year 2018 salute is an example of the very propaganda and misinformation the editors denounce, creating a false impression by omitting countless inconvenient details and emphasizing what a certain political narrative demands. There are some interesting thoughts in the article about how the new strategy of information warfare depends on spreading confusion rather than selling outright lies. Unfortunately, American media has lost the capacity for humble self-reflection necessary to understand its own role in devising and implementing that strategy.